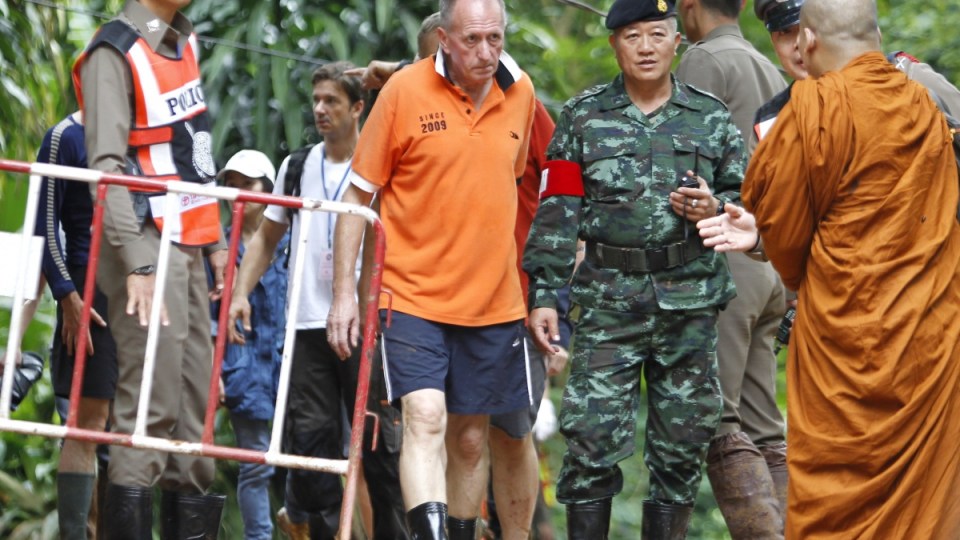 Vern Unsworth (C) was instrumental in saving 12 boys and their coach's lives in Thailand. Photo: AAP

British cave diver Vern Unsworth, who was instrumental in the rescue of the 12 boys and their soccer coach from a Thai cave, says he is considering legal action against billionaire Elon Musk after the inventor called him a “pedo guy” on Twitter.

Mr Unsworth told journalists at the cave site where the Wild Boars team was rescued last week that Mr Musk’s remarks were unfounded and amounted to an attack on the entire rescue crew.

Responding to questions on Tuesday (AEST) whether he would consider legal action against the Telsa CEO, Mr Unsworth said “Yes, it’s not finished”.

“I believe he’s called me a paedophile. Well, [if] by definition rescuing 12 young boys…that puts everybody in the same context,” he said.

“I am not gonna make any further comment about him but I think people realise what sort of a guy he [Mr Musk] is.”

Mr Unsworth added that Mr Musk “has lost the plot” and that “I have a lot of support from people around the world astonished by his unfounded comments”.

The news comes after a series of since-deleted tweets by Mr Musk on Sunday, in which he attacked the British diver over his belief the billionaire’s offer of a submarine for the rescue was a publicity stunt.

“He can stick his submarine where it hurts,” Mr Unsworth told CNN in an interview.

“It just had absolutely no chance of working. He had no conception of what the cave passage was like. The submarine was about five foot six (inches) long, rigid, so it wouldn’t have gone ’round corners or ’round any obstacles.

“It wouldn’t have made the first fifty metres into the cave … just a PR stunt.”

Billionaire tech entrepreneur Elon Musk made an unfounded and disparaging claim about an expert caver involved in the Thai cave rescue, after the caver criticized Musk's idea of using a mini-sub for the rescue: https://t.co/aPifpjBPdy pic.twitter.com/CJAmJAK3qY

The spat escalated when Mr Musk later questioned Mr Unsworth’s involvement in the rescue, describing him as a “suss” (suspicious) “British expat guy who lives in Thailand”.

Mr Musk also said he would prove his submarine was up to the task by sending it into the cave.

“Sorry pedo guy, you really did ask for it,” the 47-year-old tweeted.

When challenged by a Twitter user about the allegation levelled against Mr Unsworth, Mr Musk replied “Bet ya a signed dollar it’s true.”

He has since removed the tweets.

Almost $US2 billion ($2.7 billion) was sliced off Tesla’s market value in trading Monday US time as Mr Musk continued to face criticism for his Twitter attack.

Analysts and investors, requesting anonymity, were quoted by the ABC as saying that Mr Musk’s comments are adding to their concerns that his public statements are distracting him from Tesla’s main business of producing electric cars.

Earlier this week, Mr Musk pledged to Bloomberg he would be less combative on social media, saying “I have made the mistaken assumption – and I will attempt to be better at this – of thinking that because somebody is on Twitter and is attacking me that it is open season. That is my mistake. I will correct it.”