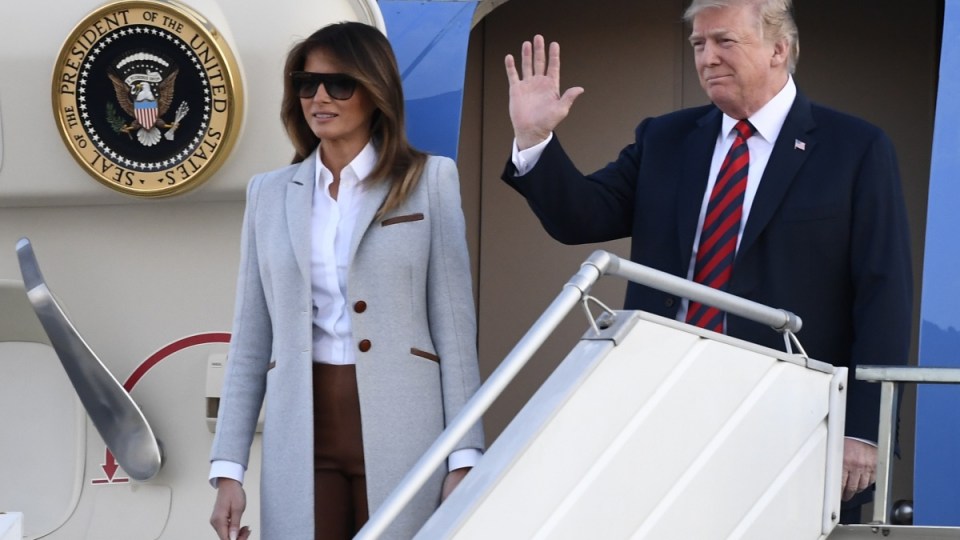 US President Donald Trump has touched down in Helsinki ahead of a one-on-one summit with his Russian counterpart in what is the last leg of a chaotic and provocative European tour.

Mr Trump has rattled his NATO allies once more by labelling the European Union a “foe” with regard to trade.

In a pre-summit interview with CBS News’ Face the Nation program aired on Monday mornong (AEST), the President lumped the EU in with China and Russia as US economic adversaries.

“I think the European Union is a foe, what they do to us in trade,” he said.

“America and the EU are best friends,” Mr Tusk wrote. “Whoever says we are foes is spreading fake news.”

America and the EU are best friends. Whoever says we are foes is spreading fake news.

The latest inflammatory comments come after the President berated America’s NATO allies over their unpaid defence bills, insulted Germany over its relationship with Russia and soured a protest-marred visit to the UK by criticising Prime Minister Theresa May’s Brexit negotiations.

Mr Trump and Mr Putin will meet later Monday in the Finnish capital for their first stand-alone meeting since Mr Trump took office in January 2017.

Flew out of Britain for Helsinki on Sunday evening local time after spending the day playing golf at his private club in Scotland.

“I go in with low expectations,” Mr Trump told CBS in the same interview. “I’m not going with high expectations.”

John Bolton, Mr Trump’s national security adviser, said in an interview with ABC’s This Week that the US would not be looking for “deliverables” and that the meeting would be “unstructured”, beginning with a one-on-one session between the two leaders.

“It isn’t a summit,” US Ambassador to Russia Jon Huntsman told NBC’S Meet the Press.

“It’s a meeting … This is an attempt to see if we can defuse and take some of the drama, and quite frankly some of the danger, out of the relationship right now.”

The meeting comes just days after 12 Russian intelligence officers were charged by a US federal grand jury for hacking the Democrats ahead of the 2016 election.

With that in mind, a senior House of Representatives Republican told CBS’s Face the Nation that Mr Trump should ask Mr Putin in Helsinki which airport the Russian hackers will be extradited to for being taken into US custody.

“Tell us where you’re going to extradite those folks,” said Representative Trey Gowdy, who chaired a raucous House investigative hearing on Thursday that highlighted bitter, partisan divisions within the US Congress over a probe of Russian election meddling that has clouded Mr Trump’s presidency.

The Helsinki summit has alarmed some NATO allies who fear Mr Putin might seek a grand deal that undermines the US-led transatlantic alliance.

The top Democrat on the Senate Intelligence Committee, Mark Warner, said he was worried about Mr Trump being alone in the room with Putin, without his national-security aides.

“We know that Trump doesn’t do a lot of prep work for these meetings. He kind of goes in and wings it,” Warner said on NBC’s Meet the Press.

“I really would feel much better if there were other Americans in the room.”

When asked by CBS if he would ask Mr Putin to extradite the Russians to the US, Mr Trump said he had not thought of that idea but that he might. Russia’s constitution forbids the extradition of its own citizens.

“I hadn’t thought of that,” Mr Trump said. “But certainly, I’ll be asking about it.”
When Mr Trump meets Mr Putin, he will sit down with a disciplined, detail-oriented and experienced Russian leader who has been on the world stage for more than 18 years, in contrast to 18 months in office for Mr Trump.

Mr Trump has said he wants to raise nuclear arms control, Ukraine and Syria with Mr Putin, who has served as Russia’s pre-eminent leader since Boris Yeltsin resigned on the last day of 1999.