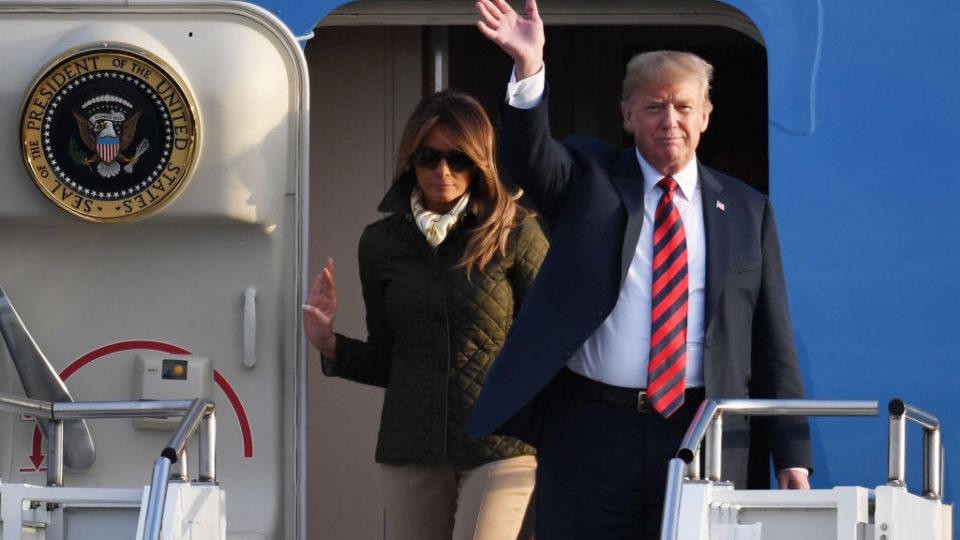 Amid a reported $8 million security detail, the Trumps were taken directly to one of of their privately-owned golf courses. Photo: Getty

US President Donald Trump and First Lady Melania have touched down in Scotland on the final leg of their inaugural UK visit amid more than 100 planned demonstrations across Britain.

Emerging from Air Force One after landing an hour behind schedule at Glasgow Prestwick Airport on Saturday morning (Friday evening at 8.20pm), the president and Melania headed off for a weekend at their privately-owned Turnberry golf resort.

According to Scotland’s The Herald newspaper, Scottish Secretary of State David Mundell briefly met the couple and said Mr Trump is pleased to be back in Scotland.

The Tory minister added: “He said he was very proud of his mother’s heritage and was looking forward to playing a round of golf tomorrow.”

And of the widespread planned demonstrations in Scotland: “I wanted to make it clear that he was being welcomed to Scotland as the President of the United States, that we value the strong relationship he has between Scotland and the United States of America.”

Fresh from a meeting with Prime Minister Theresa May at her country retreat Checkers outside London on July 12 and tea with the Queen at Windsor Castle on July 13, Mr Trump successfully avoided thousands of protestors who crammed the streets of central London.

Protesters gathered outside embassies, offices and homes carrying signs that read, “Human rights have no border,” and “Mother Earth unites us,” before marching past the shops of Regent Street on their way to Piccadilly Circus and finally Trafalgar Square.

Similar anti-Trump demonstrations were underway in Glasgow when the Trumps landed, with hundreds of protesters gathered at George Square to let him know he wasn’t welcome.

The Sun reported activists carried placards and signs with messages such as “Bolt ya rocket and make Scotland great again!”.

Activist John Cooper, 52, from Glasgow, waved a placard saying “away home ya roaster” and called Mr Trump a “global bully and a global danger”.

Communications worker Jennifer Gaff, 27, went to protest there against Mr Trump’s “anti-women stance” and voice support for abortion rights: “We want him to know we’re in this together and aren’t going to back down.”

Earlier on Friday, thousands crammed the streets of central London to vent their anger over Mr Trump’s visit, blowing horns, waving banners and hoisting a bright orange effigy of the US president on their shoulders.

Some carried more than one sign, unable to choose which policy they hated the most. The Reverend Nigel Sinclair, a 53-year-old Church of England preacher, came in what he called his Sunday vicar’s outfit, carrying a sign that showed how Mr Trump’s ideas differ from those of Jesus Christ.

Susie Mazur, 29, from Salisbury in southwestern England, crocheted a Donald Trump pin-cushion and wore it on her head, winning praise from fellow protesters.

“People coming here nowadays feel very hopeless about what is happening. They don’t like what is happening in the UK, in America, across the world – there are so many problems,” Ms Mazur said.

The day began with a giant balloon that caricatured Mr Trump as a screaming orange baby flying outside the Houses of Parliament.

The nappy-clad infant, with a quiff of hair and a mobile phone for tweeting, was the centrepiece of demonstrations.

“Depicting Trump as a baby is a great way of targeting his fragile ego, and mocking him is our main motivation,” said Matthew Bonner, one of the organisers of the balloon flight.

“He doesn’t seem to be affected by the moral outrage that comes from his behaviour and his policies. You can’t reason with him, but you can ridicule him.”

Up to 100,000 demonstrate across Britain as Donald Trump touches down in Glasgow