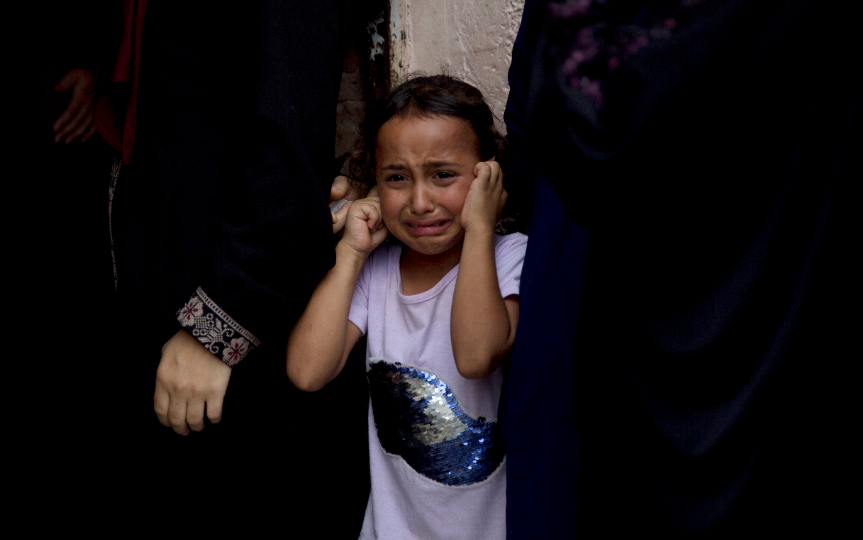 A sobbing girl blocks the sound of a relative's funeral as the bombs rain down on Gaza. Photo: AP/Khalil Hamra

Israeli aircraft have struck militant targets in the Gaza Strip and Palestinians have launched dozens of mortar bombs and rockets from the enclave into Israel, the Israeli military says.

There were no reports of serious casualties on either side of the border in Saturday’s exchange of fire which followed a familiar pattern of retaliatory attacks by the Israeli military and Gaza’s armed groups.

Gaza militants often vacate potential target sites during flare-ups and Israelis who live in villages and towns near the border have reinforced rooms in their homes and rocket sirens that alert of an incoming attack. Israel’s Iron Dome rocket interceptor system often shoots down Gaza projectiles.

The military said it struck more than 40 targets within several militant compounds belonging to Hamas, the Islamist group that rules Gaza, in what it described as one of its widest operations since a 2014 Israel-Gaza war.

The powerful blasts shook Gaza homes and black plumes of smoke were seen rising from the sites of the explosions.

Gaza militants fired more than 50 mortar bombs and rockets toward Israel, the military said, setting off sirens and sending Israelis fleeing to their shelters.

The flare-up began on Friday, when thousands of Palestinians gathered at the Israel-Gaza border area for weekly protests that have now entered their fourth month. Israeli troops shot dead a Palestinian teenager and a second protester died of his wounds on Saturday, Gaza health officials said.

The Israeli military said Friday’s protesters were throwing burning tyres, stones, explosive devices and fire bombs at its soldiers and that one of its officers was wounded by a Palestinian grenade hurled across the border fence.

Hours later, the military launched a series of air strikes in Gaza. Palestinian militants then began firing projectiles into Israel, drawing further strikes by the Israeli air force to which the armed groups responded to by launching more rockets.

More than 130 Palestinians have been killed by Israeli forces in the protests.

There have been no Israeli fatalities during the so-called “Great March of Return” demonstrations but big tracts of Israeli land have been ravaged by fires set by blazing kites or helium balloons carrying burning rags floated over from Gaza.