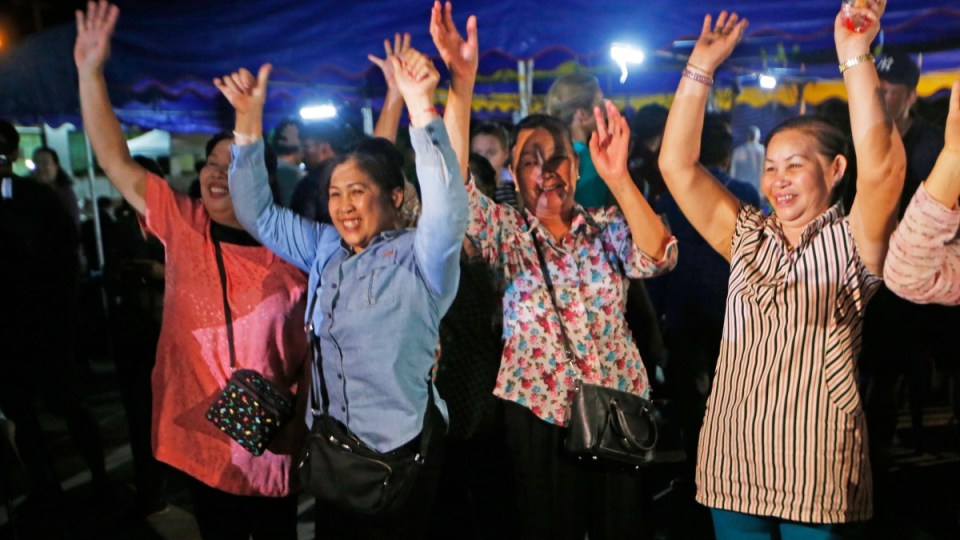 Thailand, and the world, celebrated as the cave rescue operation ended in success. Photo: Getty

The remarkable and perilous rescue operation to save 12 boys and their soccer coach from a flooded cave complex deep beneath a Thai mountain has ended in success.

Rescuers freed the last of the 13 trapped Wild Boar soccer players Wednesday night ending an ordeal spanning more than 18 days since the group went missing in the Tham Luang cave.

The Thai Navy SEALS, who have been central to the massive search and rescue mission since the June 23 disappearance, summed up the world’s reaction in a late-night Facebook post.

“We are not sure if this is a miracle, a science, or what. All the thirteen Wild Boars are now out of the cave,” it posted, adding all were safe.

The boys, aged between 11 and 16, and their 25-year-old coach became trapped while exploring the cave complex in the northern province of Chiang Rai when monsoon rains flooded the tunnels.

British divers found the group, hungry and huddled in darkness on a muddy bank in a partly flooded chamber several kilometres inside Tham Luang on Monday last week.

After several excruciating days pondering how to get the 13 out, a rescue operation was launched on Sunday when four of the boys were brought out, tethered to rescue divers.

Another four were rescued on Monday and the last four boys and the coach were brought out on Tuesday, prompting rounds of spontaneous applause as ambulances and helicopters passed.

Celebrations were tinged with sadness over the loss of a former Thai navy diver who died on Friday while on a re-supply mission inside the cave.

Petty Officer Saman Gunan, the only fatality of the rescue effort, was working in a volunteer capacity.

Chief of the rescue mission Narongsak Osottanakorn addressed reporters at the end of the mission, arriving at a media centre to a round of applause.

He confirmed that a medic and all navy SEAL divers involved in the rescue mission had also left the cave safely.

“Nobody thought we could do it. It was a world first,” he said, paying tribute to the multinational team that assisted in the operation.

“It was Mission Possible for Team Thailand.

“The heroes this time are people all over the world,” he added, referring to the international team that assisted in the operation.

“This mission was successful because we had power. The power of love. Everybody sent it to the 13.”

Presser by Chiang Rai ex governor who headed rescue ops: “This was mission impossible but Team Thailand did it.” (rough translation by Thai colleague). Met with more cheers and whoops. #ThamLuang #ThaiCaveRescue

Officials said details of the rescue operation would be revealed on Wednesday.

The eight boys brought out on Sunday and Monday were in good health overall and some asked for chocolate bread for breakfast, officials said earlier.

Two of the boys had suspected lung infections but the four boys from the first group rescued were all walking around in hospital.

Volunteers from as far away as Australia and the United States helped with the effort to rescue the boys. US military personnel also helped.

MISSION COMPLETED: Such an incredible feeling to finally be able to confirm that 12 boys, coach from Thailand's Wild Boar Academy football team have safely come out of #ThamLuang cave complex after being trapped inside for 17 days. Welcome home! 🐗🐗🐗🐗🐗🐗🐗🐗🐗🐗🐗🐗🐗 pic.twitter.com/YTa0yWNepK

The boys were still being quarantined from their parents because of the risk of infection and would likely be kept in hospital for a week for tests, officials said.

There were concerns the boys, who are members of youth soccer team the Wild Boars, could have contracted a cave-dwelling virus or bacterial disease able to spread from animals to humans, the hospital’s spokesperson said in a statement on Monday.