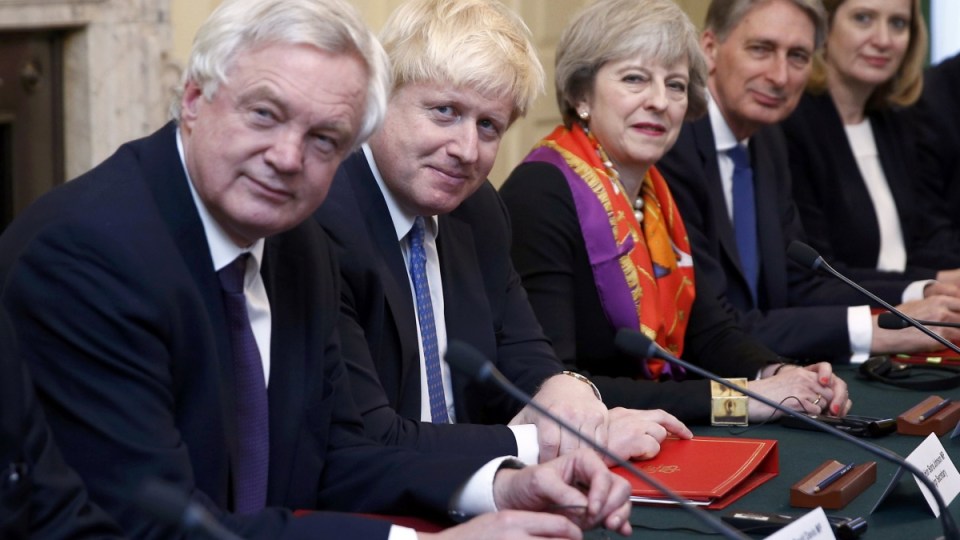 David Davis (left) and Boris Johnson have resigned in a major blow to Theresa May. Photo: Getty

The UK government is facing its biggest crisis in more than a year after Foreign Secretary Boris Johnson and David Davis, the minister in charge of steering the UK out of the European Union, made the shock decision to resign.

The two resignations leave Mrs May badly exposed at the head of a government unable to unite over Britain’s biggest foreign and trading policy shift in almost half a century.

They are the biggest challenge to the Prime Minister’s authority since the disastrous 2017 general election, which she called in the expectation of a landslide victory but ended up costing her a parliamentary majority.

They also raise questions as to whether Mrs May will be able to weather the resignations and stand firm in her commitment to pursue a “business friendly” Brexit, or will be faced with more challenges to her authority and calls to quit herself.

Mrs May will fight any attempt to oust her, her spokesman said on Monday.

Mr Johnson’s and Mr Davis’ resignations were a response to the announcement of a new approach to Brexit negotiations, which Mr Davis said gave the EU too much power.

In his resignation letter, Mr Johnson said Mrs May was leading the UK into a “semi-Brexit” with the “status of a colony”.

Addressing Parliament just minutes after her office announced that Mr Johnson, the face of Brexit for many in Britain, had quit, Mrs May told MPs she appreciated the work of her two ministers.

She added with a hint of irony: “In the two years since the referendum, we have had a spirited national debate, with robust views echoing around the cabinet table as they have on breakfast tables up and down the country.”

At the heart of Mr Johnson and Mr Davis’ grievance is the debate between ‘hard’ and ‘soft’ Brexit – whether the UK stands completely apart from Europe, with total control of its own laws, but much less access to European markets (hard); or whether it compromises, allowing the EU to have some power over it for the sake of freer access to its lucrative markets (soft).

Mr Johnson did not pull any punches in his letter of resignation, saying Brexit “should be about opportunity and hope” and a “chance to do things differently”, but “that dream is dying, suffocated by needless self-doubt”.

“It now seems that the opening bid of our negotiations involves accepting that we are not actually going to be able to make our own laws,” he said.

“In that respect we are truly headed for the status of colony – and many will struggle to see the economic or political advantages of that particular arrangement.”

Mr Davis earlier said Mrs May’s policy would leave the UK “in at best a weak negotiating position, and possibly an inescapable one”.

“In my view the inevitable consequence of the proposed policies will be to make the supposed control by parliament illusory rather than real,” Mr Davis said in his resignation letter.

“As I said at cabinet, the ‘common rule book’ policy hands control of large swathes of our economy to the EU and is certainly not returning control of our laws in any real sense.”

Currently, the EU imposes all sorts of laws and regulations on the UK (with the UK government’s consent, though not UK parliament’s), mostly relating to trading, labour, social, environmental and consumer standards.

Under Mrs May’s latest proposal, devised at a cabinet meeting at the PM’s country residence Chequers, the UK would continue to work very closely with the EU, establishing a ‘common rulebook’.

This rulebook would keep the UK and the EU on the same footing in certain core areas, meaning free trade could continue between the two, even though the UK would not nominally be part of the EU.

It would keep customs borders open between the UK and the EU, and see UK courts collaborating closely with the Court of Justice of the European Union.

However, the proposal would end free movement of people between the EU and the UK, give the UK an independent seat at the World Trade Organisation, and give back the UK control of its waters.

The Chequers agreement ended with an ominous statement: “Given the short period remaining before the necessary conclusion of negotiations this autumn, we agreed preparations should be stepped up.”

The UK will leave the EU on March 29, 2019 – less than nine months’ time. If it reaches no deal with the EU, it will face a so-called ‘hard Brexit’, which would drastically limit UK businesses’ access to European markets.

What is the problem?

Mr Johnson and Mr Davis’s issue with the Chequers agreement is simply that it is not extreme enough.

Hard Brexiteers expect a very high level of autonomy, and their view is that the Chequers agreement does not provide this.

The position of the hard Brexiteers was expressed by Mr Davis’s fellow Brexiteer and influential Conservative MP Jacob Rees-Mogg in an op-ed in London newspaper The Telegraph on Monday.

His central point was that the Chequers agreement would give the EU a huge amount of de facto power over British laws.

“Sadly, the real problem with Chequers is that it has been driven by those who never thought that leaving the EU was a good idea,” Mr Rees-Mogg wrote.

“It is the ultimate statement of managing decline. It focuses on avoiding risk, not on the world of opportunity outside the EU. Pragmatism has come to mean defeatism.”