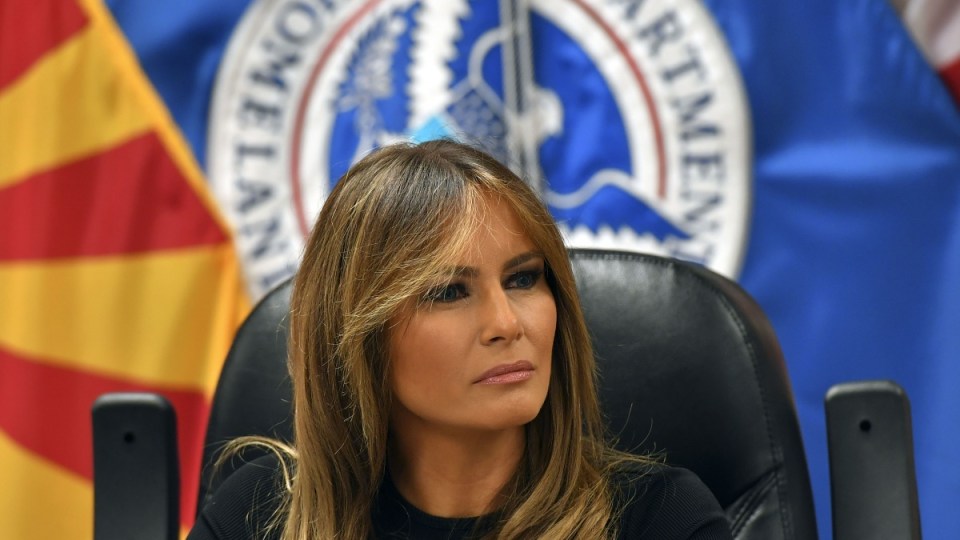 Melania Trump takes part in a round-table discussion at a detention centre in Arizona. Photo: Getty

Melania Trump has continued to pressure her husband, US President Donald Trump, over the treatment of migrant children separated from their parents.

The first lady traveled to a border detention facility for a second time on Friday morning (Thursday local time) to get a first-hand look at what families, and especially children, are still facing.

More than 2300 immigrant children were separated from their parents after the Trump administration adopted a “zero tolerance” policy for illegal immigrants in April.

Last week, amid pressure from advocacy groups and media reports, Mr Trump softened his tack, ordering families to be held together.

Some children have been reunited with their parents, but more than 2000 remain in detention centres and foster homes.

Friday’s visit to Arizona comes a week after Mrs Trump travelled to a children’s shelter in Texas.

“She’ll continue to give her husband her opinion on what her thoughts are on family reunification,” Mrs Trump’s spokeswoman Stephanie Grisham told reporters travelling on her plane.

“She’s advocating for quality care for these children as they’re in a difficult situation.”

At the US Customs and Border Protection Facility in Arizona, Mrs Trump thanked the facilities’ officers for their work and toured the border patrol centre where immigrants are brought when they are first detained, Ms Grisham said.

She also held discussions with border patrol officers, immigration agents, US marshals and a local rancher.

“She really wants to learn and educate herself about issues on the border. She wants to talk to people on the frontlines and she wants to thank them for their oftentimes dangerous work,” Ms Grisham said.

She added that Mrs Trump continues to “encourage family reunification” and urge Congress “to fix our broken immigration system”.

“She recognises it’s a complex issue … She definitely believes in strong border laws. She wants to make sure the kids are well taken care of,” Ms Grisham said of Mrs Trump.

The Trump administration has said it adopted the family separation policy to protect children from human smuggling, trafficking, and other criminal actions.

Immigration lawyers and advocates working with the families have said it has been extremely difficult to reunite the children with their parents, some of whom have already been deported.

Some media reports have said there are few records that demonstrate ties between the children and their parents or caregivers, or that say where the children have been sent.

Additionally, amid a dearth of space for families to be held together, Trump’s administration has asked the US military to provide shelter for as many as 12,000 people.

Earlier this week, a US court blocked the administration from separating families at the border and ordered all children to be reunited with their parents within 30 days.

Last Thursday, while visiting the centre in McAllen, Texas, housing 55 children, mainly from Honduras and El Salvador, Mrs Trump said she wanted to see children reunited with their families as quickly as possible.