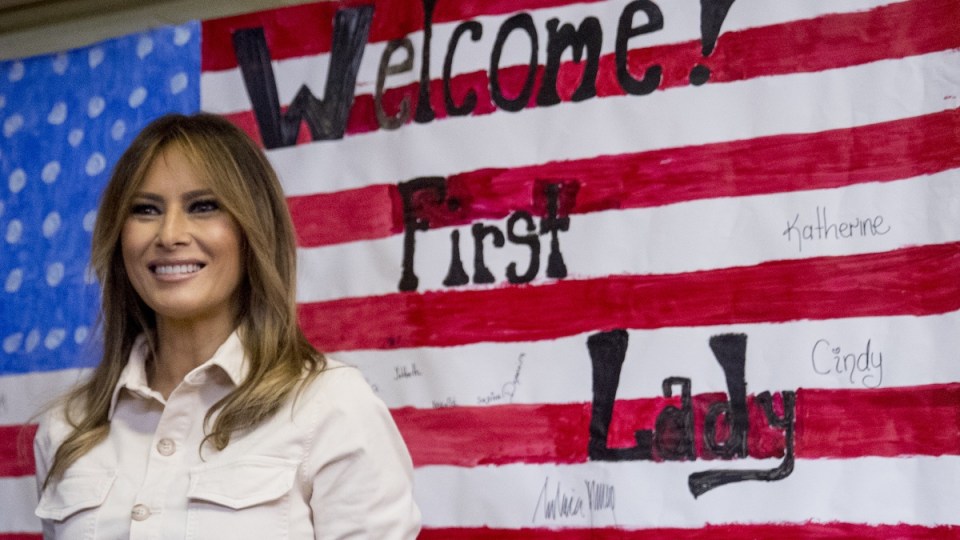 Melania Trump has gone on a damage-control mission to the US border, making an unannounced visit to children displaced by the country’s immigration policy and showing a softer side than the hardline policies of her husband, US President Donald Trump.

The first lady left the White House quietly on Thursday night (AEST) and flew to Texas for the visit, a day after Mr Trump signed an executive order keeping intact families who cross into the US illegally from Mexico.

The surprise visit came as Mr Trump said he has directed the departments of Justice, Homeland Security and Health and Human Services “to work together to keep illegal immigrant families together during the immigration process and to reunite these previously separated groups”.

Mr Trump reversed his tough stance on separating families after days of outrage over the policy from both sides of US politics – as well as world leaders, the United Nations and Pope Francis – after images emerged of migrant children detained in cages.

Mrs Trump met with officials and employees at a facility where 55 children aged 12 to 17 are housed. Six of the children were separated from their parents upon crossing the border, authorities told reporters.

The first lady sat alongside Health and Human Services Secretary Alex Azar at a table at Upbring New Hope Children’s Center and heard caregivers explain how the children are well treated. She asked many questions, seeking assurances that they are being properly cared for.

“I’m glad I’m here and I’m looking forward to seeing and meeting children, but first of all let me begin to recognise each of you and thanking you for all that you do, for your heroic work that you do every day and what you do for those children,” Mrs Trump said.

“I’d also like to ask you how I can help these children to reunite with their families as quickly as possible,” she said.

Later, she toured a section of the facility where the children have bedrooms and was told they maintain their own rooms.

She visited a schoolroom at Upbring and chatted with about 20 young girls and boys who had school folders on their desks. She spoke to many individually through a translator, and as she walked out she told them: “Be kind and nice to each other, OK? Nice to meet you.”

In one classroom, children were being taught about the July Fourth Independence Day holiday. On the wall was a handpainted American flag and the children signed it. The first lady signed it as well.

“Mrs. Trump hates to see children separated from their families and hopes both sides of the aisle can finally come together to achieve successful immigration reform,” Ms Grisham said in a statement.

Despite the visit, criticism of Mr Trump continued, with Time magazine featuring a powerful image condemning the President on its cover.

The magazine’s July edition, published the same day Mrs Trump flew to the border, asks the question “what kind of country are we?” and features Mr Trump towering over a distraught migrant toddler with the words “Welcome to America” as the headline.

The two-year-old Honduran girl on the cover was made famous after being captured crying as her mother was taken by police for crossing the US-Mexico border illegally.

TIME’s new cover: A reckoning after Trump's border separation policy: What kind of country are we? https://t.co/U4Uf8bffoR pic.twitter.com/sBCMdHuPGc

In signing the executive order reversing the separation policy on Thursday, Mr Trump cited his daughter and his wife as factors in his decision.