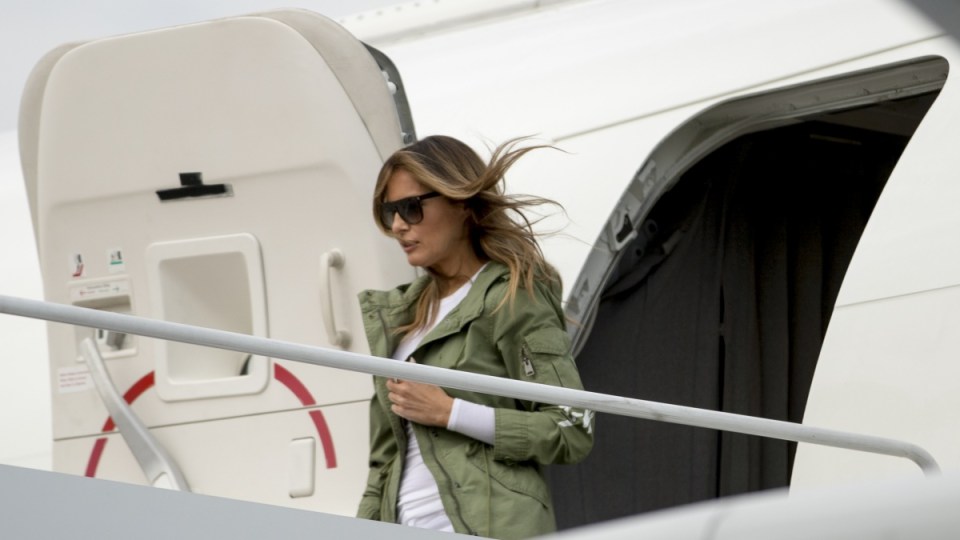 Melania Trump traveled to and from her visit with migrant children wearing a "I really don’t care, do U?" jacket. Photo: AAP

Melania Trump’s surprise visit to Texas amid the child-migration crisis makes her the first member of the US President’s inner circle to personally bear witness to the situation that is grabbing world headlines.

Something else that made headlines? The jacket the first lady wore as she left Washington, which sparked a row between her husband Donald Trump and communications director Stephanie Grisham.

Mrs Trump flew to Texas for the unannounced trip on Thursday (US time) wearing a parka emblazoned with the words, “I Really Don’t Care, Do U?”

The jacket was reportedly a $52 Zara design from a 2016 collection, a departure from Mrs Trump’s usual high-end look for official business.

Social media users quickly slammed Melania’s fashion choice as tone deaf, and some suggested she might be sending a pointed message to her husband.

“It is a poor fashion choice by the first lady, regardless of who she is visiting,” Melbourne stylist Suzy Eskander told The New Daily.

“She should not even own this piece of clothing , let alone wear it on official duties. Her wardrobe and her actions are political messages whether she likes it or not.”

The president was having none of it, taking to Twitter to insist the first lady was taking a shot at the “fake news” media via the style spotlight.

“Melania has learned how dishonest they are, and she truly no longer cares!” the president said.

“I REALLY DON’T CARE, DO U?” written on the back of Melania’s jacket, refers to the Fake News Media. Melania has learned how dishonest they are, and she truly no longer cares!

“It’s a jacket. There was no hidden message,” Ms Grisham said in a statement.

“After today’s important visit to Texas, I hope the media isn’t going to choose to focus on her wardrobe (Much like her high heels last year).”

Ms Grisham also tweeted a message with the hashtags ‘She cares’ and ‘It’s just a jacket’.

The heels reference stemmed from Mrs Trump’s August 2017 visit to Texas for a briefing on Hurricane Harvey. She was derided for boarding the presidential flight wearing sky high Christian Louboutin pumps.

Today’s visit w the children in Texas impacted @flotus greatly. If media would spend their time & energy on her actions & efforts to help kids – rather than speculate & focus on her wardrobe – we could get so much accomplished on behalf of children. #SheCares #ItsJustAJacket

It is the second time this month that Ms Grisham has issued a public smackdown on Mrs Trump’s behalf.

“I don’t believe Mrs. Trump has ever discussed her thoughts on anything with Mr. Giuliani,” Ms Grisham said in a statement.

The first lady’s trip came a day after Mr Trump signed an executive order keeping intact families who cross into the US illegally from Mexico.

For Thursday’s visit, Melania changed into a pale yellow jacket before landing in McAllen, Texas. She spent just over an hour with 55 children, most from Guatemala, at the Upbring New Hope Children’s Shelter.

During her visit Mrs Trump’s tone was compassionate, according to reports which said she asked facility staff, “How I can help these children to reunite with their families as quickly as possible?”

She was back to combative soon afterwards, wearing the controversial jacket again when she left her military flight home, where her son Barron, 12, was reportedly waiting for her.

Commentators were split on whether Melania – who has seemed to diverge from her husband’s attitude on separating children from parents – chose the parka as a political nod to those who think she is being too soft on immigration.

Others saw it as a calculated personal move or simple fashion faux pas.

We are shook by the blatant lack of empathy in Melania Trump’s jacket she wore to visit children in detention in Texas. pic.twitter.com/PtWOJSMk8z

So the First Lady chose to wear a jacket today visiting the concentration camps. with the words on the back of her coat saying ..I REALLY DONT CARE DO YOU ? I’m truly flummoxed .