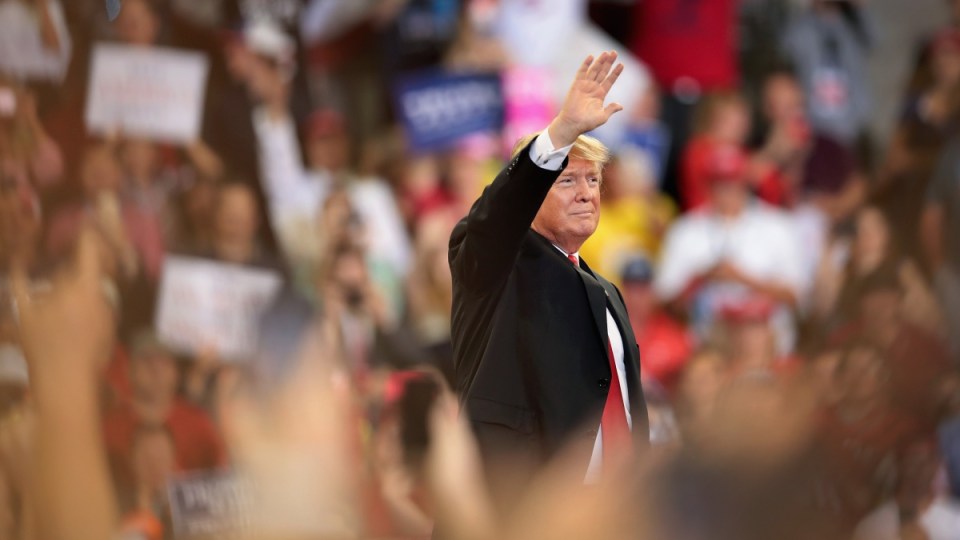 US President Donald Trump at the Duluth rally. Photo: Getty

Just hours after his about-turn on the forced separation of migrant families on the US-Mexico border, US President Donald Trump has mocked protesters and geed up supporters at an 8000-strong rally in Minnesota.

Mr Trump arrived by Air Force One in Duluth at the rally to support the election campaign of Minnesota Congress hopeful Pete Stauber, who introduced him to the enthusiastic crowd.

Hundreds more were unable to get inside the 9000-seat Amsoil Arena, and lined up on the street outside as Mr Trump spoke. Inside, the arena was festooned with American flags and the crowd responded with chants to many of Mr Trump’s cues.

There were boos from the crowd as protesters twice halted the rally. One  protester who held up a poster of registered sex offender Jeffrey Epstein was escorted from the venue – and given a serve from Mr Trump: “Was that a man or a woman? I can’t tell because he needs a haircut.”

The President also belittled another protester.

“So we have a single protester. He’s going home to his mom. Say hello to mommy,” he said.

In his address, Mr Trump drew attention to what he called the “dishonest” members of the media in attendance, claiming he was given too little credit for the booming US economy – which he said had created 3.4 millions jobs in 18 months. At that, the crowd booed and aimed chants of “CNN sucks, CNN sucks” towards gathered journalists.

Earlier, he posted a picture of the rally to Twitter with the caption: “So sorry, people wanting to get into the already packed arena – I LOVE YOU ALL!”

So sorry, people wanting to get into the already packed arena – I LOVE YOU ALL! pic.twitter.com/PFvXrsvgkA

In his speech, he played down the crisis that had threatened to envelope the White House as images of children being taken from their parents sparked global condemnation.

He briefly mentioned his decision to sign an executive order after spending days insisting, wrongly, that his administration had no choice but to separate families apprehended at the border because of federal law and a court decision.

“We’re going to keep families together and the border is going to be just as tough as it’s been,” Trump told the cheering crowd in Duluth.

He denounced his political opponents and those who make unauthorised border crossings, suggesting that the money used to care for those immigrants could be better spent on the nation’s rural communities and inner cities.

“Democrats put illegal immigrants before they put American citizens. What the hell is going on?” Mr Trump said, prompting the crowd to chant “Build the wall”.

The Trump administration still faces legal challenges because of a court order that caps how long immigration authorities may detain minors.

A Justice Department official was unable to clarify whether family separations would end immediately or when and how families now separated would be reunited.