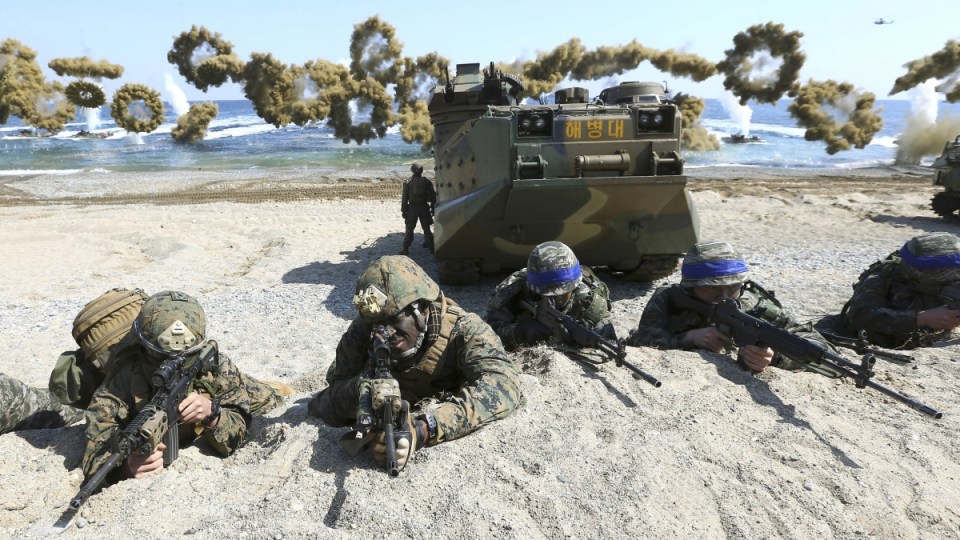 US and South Korean marines land on a beach during a joint military exercise at Pohang in 2016. Photo: AP

South Korea and the United States are expected to announce their decision to suspend large-scale combined military exercises this week amid a dialogue with North Korea.

The allies are likely to include a “snapback” clause in the announcement, a government source says, hinting that the exercises would resume should the communist regime fail to deliver on its denuclearisation commitment.

After his historic summit with North Korean leader Kim Jong-un in Singapore last Tuesday, US President Donald Trump said he will stop “provocative, inappropriate and expensive” war exercises with the South, which Pyongyang has decried as an invasion rehearsal.

The South Korean and US military authorities have been having close consultations over the combined exercises that Mr Trump has said he will stop, the source said.

“This week, the South Korean and US defence ministries will jointly announce the results of their discussions,” the source added.

Mr Trump’s plan to stop “war games” with South Korea is stirring up heated debate, with supporters calling it a goodwill gesture to facilitate the North’s denuclearisation and nay-sayers as a blow to the bilateral alliance.

Amid dialogue with the North in 1992, Seoul and Washington cancelled their Team Spirit exercise, which resumed the following year.

The allies’ militaries have long defended their regular exercises as purely “defensive in nature”, rejecting the North’s persistent claim that the drills are aimed at making a nuclear foray into the North’s territory.

The allied exercises are based on a series of joint contingency plans that delineate a series of procedures to handle a wide range of scenarios, such as a full-blown war triggered by attacks or invasion by the North.

At Tuesday’s summit, the North Korean leader reaffirmed his commitment to the “complete denuclearisation” of the Korean Peninsula in a joint statement with Trump.

But it drew criticism as it lacked specifics, such as a timeline or a method for nuclear disarmament.