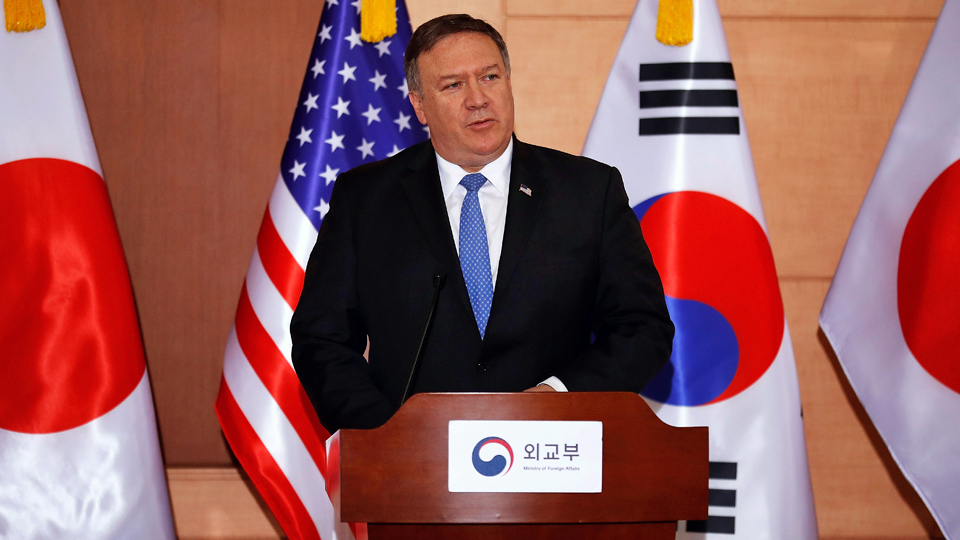 The US has set a loose deadline of 2020 for North Korea to carry out “major disarmament” of its nuclear weapons.

Secretary of State Mike Pompeo told reporters in Seoul on Wednesday (Australian time) he expected the regime to take such steps within President Donald Trump’s first term, which ends in 2020.

“We’re hopeful that we can achieve that in, what was it, the next two and half years,” he said.

“We’re hopeful we can get it done. There’s a lot of work left to do.”

The agreement signed by Mr Trump and Mr Kim on Tuesday committed the two nations to “work toward complete denuclearisation of the Korean Peninsula”. No deadline or process of verification was agreed.

Despite claims to the contrary from North Korea, Mr Pompeo said the US would not ease sanctions until the North dismantled its nuclear weapons.

The top diplomat bristled when a reporter suggested the text of the agreement was too vague.

“I find that question insulting and ridiculous and frankly ludicrous. I just have to be honest with you, it’s a game, it’s a game, and one ought not play games with serious matters like this,” he said.

A jubilant-sounding Mr Trump declared on Wednesday his “deal” with Mr Kim had ended the North Korean nuclear threat.

“There is no longer a nuclear threat from North Korea,” he wrote on Twitter.

He added: “Before taking office people were assuming that we were going to War with North Korea. President Obama said that North Korea was our biggest and most dangerous problem. No longer – sleep well tonight!”

When asked about these tweets, Mr Pompeo said the President had sent them “with eyes open wide”.

Meanwhile, the US military has been caught by surprise by Mr Trump’s additional promise, not contained in the written agreement, to suspend military exercises with South Korea – which Mr Trump derided as “provocative” and “war games”.

US officials said it was unclear what types of training involving US and South Korean troops might cross into Mr Trump’s now forbidden zone of “war games”.

On Thursday, Mr Pompeo confirmed to reporters that Mr Trump was unambiguous that the exercises would be frozen as long as there were productive, good-faith negotiations with Pyongyang.

“His intention here was to put us in a place where we get the opportunity to have productive conversations connected to the denuclearisation of North Korea,” he said.

The decision to halt military exercises in South Korea bewildered many current and former US defence officials, who only learned about it when Mr Trump made his remarks.

They fear it could erode the readiness of US troops in the region.

Critics, including in Congress, warned an end to joint US-South Korean drills could also erode the effectiveness of the military alliance between Washington and Seoul. They also baulked at Mr Trump’s justification that cutting drills would save money.

US wants ‘major disarmament’ of North Korea by 2020