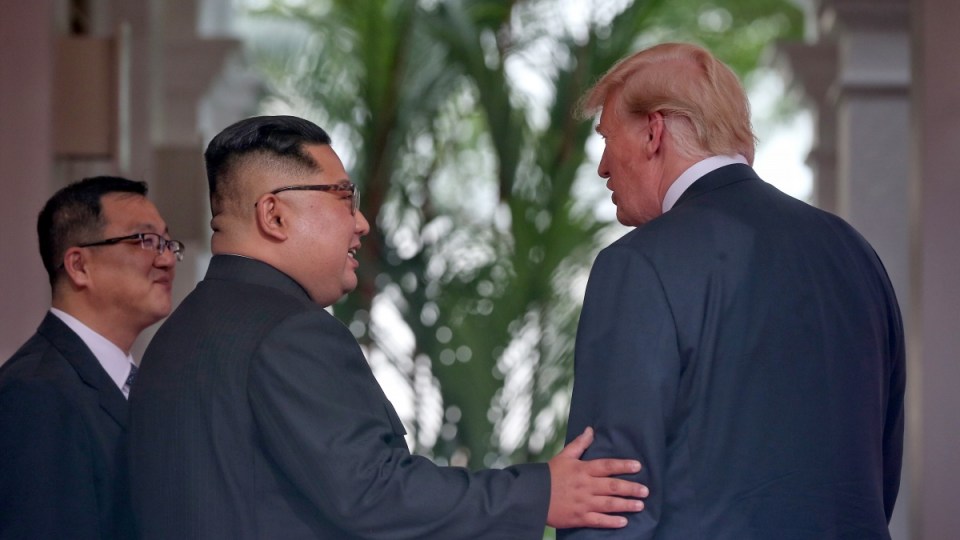 North Korea says leader Kim Jong-un and US President Donald Trump have agreed to pay each other a visit.

KCNA said the two leaders “gladly accepted each other’s invitation, convinced that it would serve as another important occasion for improved” relations between the two countries.

The invitations, which observers said appeared to be a trade of diplomatic pleasantries, could also depend on progress in Mr Kim’s pledge of denuclearisation made during Tuesday’s summit in Singapore.

No sitting heads of state from the US or North Korea have visited each other’s countries since the 1953 Korean War cease fire.

Mr Trump, meanwhile thanked Mr Kim for “taking the first bold step toward a bright new future for his people”, in a tweet from Air Force One en route to the US.

The President said the Singapore summit: “proves that real change is possible!

“There is no limit to what NoKo can achieve when it gives up its nuclear weapons and embraces commerce & engagement w/ the world.”

He also thanked Mr Kim for their “great day together”, before taking a swipe and those who sought to criticise the meeting.

The World has taken a big step back from potential Nuclear catastrophe! No more rocket launches, nuclear testing or research! The hostages are back home with their families. Thank you to Chairman Kim, our day together was historic!

A year ago the pundits & talking heads, people that couldn’t do the job before, were begging for conciliation and peace – “please meet, don’t go to war.” Now that we meet and have a great relationship with Kim Jong Un, the same haters shout out, “you shouldn’t meet, do not meet!”

While Mr Trump was talking up his achievements, Australian Foreign Minister Julie Bishop was more guarded in her assessment of the summit and the significance of its loosely-worded agreement to denuclearise North Korea.

North Korea’s record of going back on agreements mean’t the onus was on Pyongyang to prove it is genuine, Ms Bishop said Wednesday.

“The test now is this declaration that was signed with the US President in front of the world’s media that must stand, and the onus now is on North Korea to prove that it’s genuine,” she said.

The four-point agreement was scant on detail around verification of any steps by North Korea toward complete and irreversible denuclearisation.

It also did not mention points raised later by Mr Trump around the abduction of Japanese citizens, human rights abuses or the withdrawal of US troops.

“It was one meeting and we should never have expected that everything would be resolved in one meeting,” she said, adding it could take months or years of further work.

Mr Trump raised eyebrows with his promise that the US will halt “provocative” military exercises with South Korea.

The President revealed after the agreement was signed Tuesday that Washington would cease the war games, which Pyongyang regards as rehearsals for an invasion, as part of security assurances offered to Mr Kim in return for nuclear disarmament.

“We will be saving a tremendous amount of money, plus I think it is very provocative [to hold the exercises],” Mr Trump said during a lengthy press conference after talks with Mr Kim in Singapore, in the first meeting between a sitting US president and a North Korean leader.

Mr Trump also said he would like to see the withdrawal of the 30,000 US soldiers stationed in allied South Korea – a longstanding goal of Pyongyang – although “not right now”.

“I want to bring our soldiers back home,” he said.