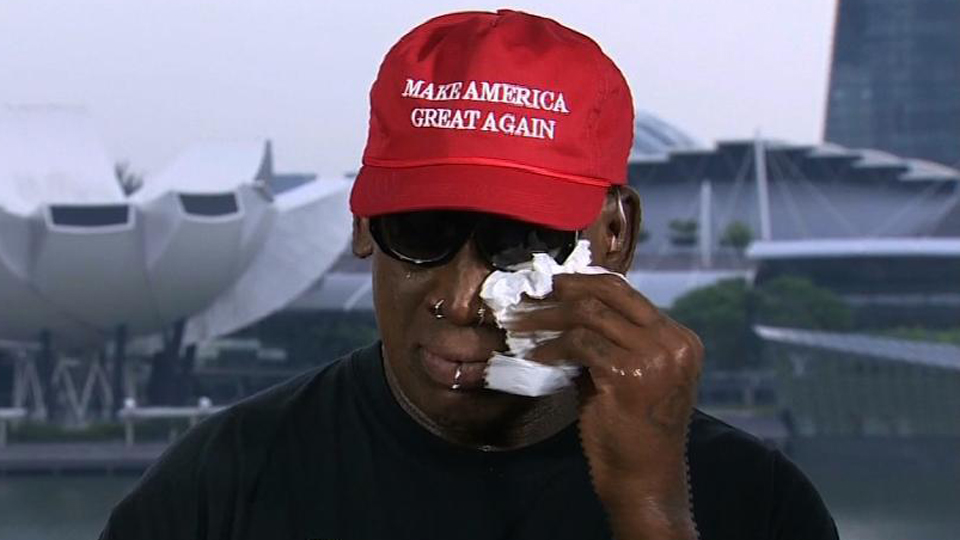 Former NBA star Dennis Rodman has wept as he claimed to have endured death threats to help “protect everything” by laying the groundwork for the historic meeting between President Donald Trump and North Korean leader Kim Jong-un.

“I got death threats, I got so many death threats while I was sitting there protecting everything and I believed in North Korea,” a teary Mr Rodman told CNN from Singapore on Tuesday, wearing sunglasses and a ‘Make America Great Again’ hat.

“But I kept my head up high, brother. I knew things were doing to change. I knew it. I was the only one.”

The eccentric former athlete and reality TV star was referring to his trips to North Korea in 2013 and 2017.

“I took those bullets, I took all that, I took everything that everyone came at me and I’m still standing. This is a great day for everybody.”

Mr Rodman recalled how former president Barack Obama failed to take him seriously when he returned from Pyongyang with a message from Kim after one of his trips.

Mr Obama “just brushed me off” and “didn’t even give me the time of day,” he said.

He also revealed that a White House staffer called him to say Mr Trump was proud of him. The White House did not immediately respond to questions about the call.

“She [the secretary] called me and said, ‘Dennis, Donald Trump is so proud of you. He thanks you a lot.’ And that means a lot.”

Mr Rodman added he suspected he “somewhat had something to do with this North Korean situation.”

"Today is a great day," former NBA star Dennis Rodman says in an emotional interview in which he describes his relationship with North Korean leader Kim Jong Un https://t.co/atvQwe7jo0 pic.twitter.com/dEgQf3kBtE

He expressed hope that Trump and Kim would be able to make progress.

“We don’t need a miracle. We just need the doors to be opened so we can start fresh,” he said, describing the event as a “great day” and exclaiming: “I’m so happy!”

His advice to Mr Trump was for him to go into the one-on-one meeting with his “heart on the table”.

“[He should] let Kim Jong-un see him really emotional.

Asked to describe Kim, Rodman said the autocratic leader was “like a big kid” who wants to have a good time, but is “trying to protect his people” and his honour.

“This guy wants to be around the world. He wants to come to America. He wants to enjoy his life. He wants his people to enjoy this life,” said Mr Rodman, adding that Kim is “not a dumb man”.

Mr Rodman struck up an unlikely friendship with Mr Kim over their shared love of basketball.

Mr Rodman was in Singapore for Tuesday’s summit, but the White House had said he would play no official role.

Earlier, he told reporters at Changi airport he came to Singapore “to see what’s going on” and that he hopes “that things turn out to be well for everyone in the world”.

Mr Rodman is one of the few Westerners to have met the North Korean leader on visits to the capital city of Pyongyang.

Asked if he would meet Mr Kim in Singapore, the ex-basketball player said he thought the North Korean leader “has bigger things to worry about than seeing me right now”.

However, he said, every time he has met Mr Kim, it has been a surprise, so maybe he would be surprised again on Tuesday.

Mr Trump said last week that Mr Rodman had not been invited to the summit.

Mr Rodman arrived in Singapore wearing a T-shirt promoting PotCoin, which has sponsored his travel to North Korea in the past.

The cryptocurrency company gives marijuana businesses access to banking as an alternative to many financial institutions that will not do business with cannabis companies because marijuana is illegal under US federal law.