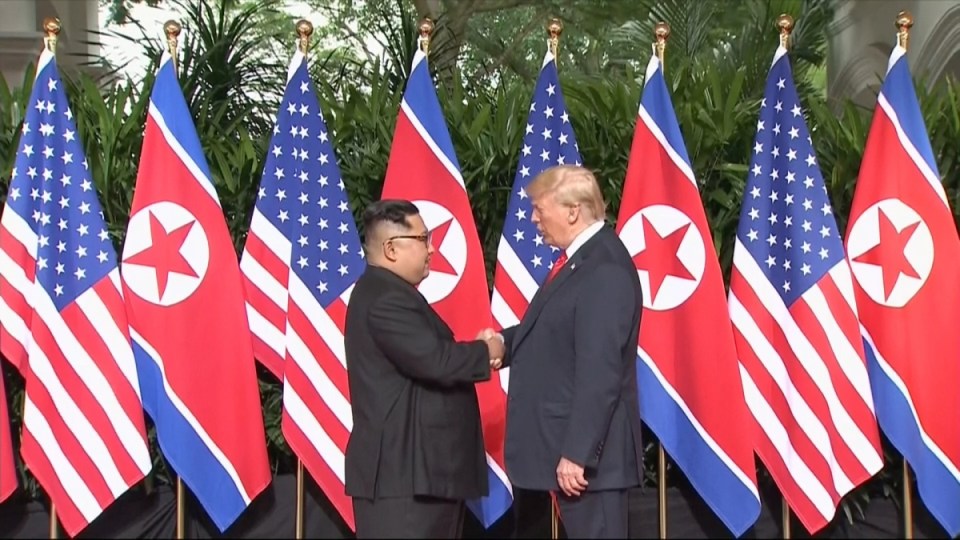 US President Donald Trump and North Korean leader Kim Jong-un have ended their one-on-one talks and are now engaged in an extended bilateral meeting with their staff in Singapore.

Mr Trump and Mr Kim spoke for just over 45 minutes by themselves, with only their translators present.

Over a noisy barrage of camera shutters, Trump could be heard saying, “It will be done”, although it wasn’t clear what he was referring to.

Mr Kim and Mr Trump had earlier shaken hands, smiling cautiously at the outset of their historic summit, in which they will look for ways to end a nuclear stand-off on the Korean peninsula.

Mr Trump and Mr Kim strode out from opposite sides onto a red carpet in front of alternating US and North Korean flags. After the handshake, they stood unsmiling in front of waiting photographers, their arms at their sides.

After their initial discussion, Mr Trump and Mr Kim emerged, walking side-by-side through the colonnaded hotel before re-entering the meeting room, where they were joined by their most senior officials.

Mr Kim was heard telling Mr Trump through a translator: “I think the entire world is watching this moment. Many people in the world will think of this as a scene from a fantasy … science fiction movie.”

Mr Kim also sounded positive: “We overcame all kinds of scepticism and speculations about this summit and I believe that this is good for the peace,” he said.

Should the talks succeed in making a diplomatic breakthrough, it could bring lasting change to the security landscape of North-East Asia. Denuclearisation of the isolated Asian nation is a prime focus for the West.

Technically, the combatants of the 1950-53 Korean War are still at war. The conflict, in which millions of people died, was concluded only with a truce.

Mr Trump earlier found time to fire out a last-minute Twitter volley just hours before his meeting, talking up the summit and blasting his detractors. On Tuesday morning, he tweeted that his historic summit could “work out very nicely”.

He said staff-level meetings between the countries were “going well and quickly … but in the end, that doesn’t matter. We will all know soon whether or not a real deal, unlike those of the past, can happen!”

Earlier on Tuesday, Australian Foreign Minister Julie Bishop explained what both parties were hoping to achieve from the negotiations (see video below).

The President also took aim at the “haters and losers” who opposed his decision to meet Mr Kim.

“The fact that I am having a meeting is a major loss for the US, say the haters & losers. We have our hostages, testing, research and all missle (sic) launches have stoped, and these pundits, who have called me wrong from the beginning, have nothing else they can say! We will be fine!” he wrote.

The fact that I am having a meeting is a major loss for the U.S., say the haters & losers. We have our hostages, testing, research and all missle launches have stoped, and these pundits, who have called me wrong from the beginning, have nothing else they can say! We will be fine!

While Mr Trump was optimistic about prospects for the summit between the old foes, US Secretary of State Mike Pompeo injected a note of caution ahead of the first-ever meeting of sitting US and North Korean leaders, saying it remained to be seen whether Mr Kim was sincere about his willingness to denuclearise.

Officials from the two sides held last-minute talks aimed at laying the groundwork for a meeting that was almost unthinkable just months ago, when the two leaders were exchanging insults and threats that raised fears of war.

Mr Pompeo played down the possibility of a quick breakthrough and said the summit should set the framework for “the hard work that will follow”, insisting that North Korea had to move toward complete, verifiable and irreversible denuclearisation.

The White House later said discussions with North Korea had moved “more quickly than expected” and Mr Trump would leave Singapore on Tuesday night, after the summit. He had earlier been scheduled to leave on Wednesday.

Mr Kim is due to leave on Tuesday afternoon.

The leaders are expected to publicly announce the results of the summit later this evening.