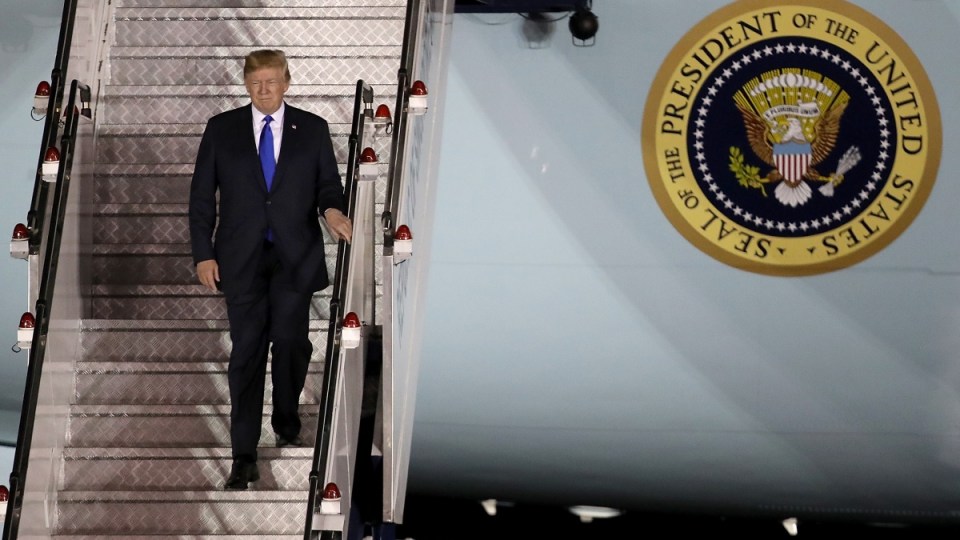 Mr Trump has maintained he will demand Mr Kim give up his nuclear weapons. Photo: Getty

US and North Korean officials have held talks in a late bid to narrow differences before leader Kim Jong-un and US President Donald Trump hold a summit in Singapore.

The two leaders arrived in the tropical city-state on Sunday (local time), aiming to finding ways to end a nuclear stand-off on the Korean peninsula.

Key gaps remain over what denuclearisation would entail for two countries that have been enemies since the 1950-1953 Korean War, and the officials were trying to push the agenda forward before their leaders meet on Tuesday.

Mr Kim has signalled they would discuss setting up a “permanent … peace-keeping mechanism” for the Korean peninsula when the pair meets for the historic summit.

An editorial published on Monday in North Korea’s official state media has hinted at a possible “normalising” of US ties.

While the US has maintained it will demand North Korea give up its nuclear weapons, it is not clear what price Pyongyang will demand for denuclearisation.

Mr Trump and Mr Kim will hold talks from 11am (9am local time) on the Singaporean island of Sentosa in what will be the first meeting between sitting leaders of the US and North Korea.

A dispatch by the state-run Korean Central News Agency said Mr Kim and Mr Trump will exchange “wide-ranging and profound views” on establishing a new relationship, the issue of building a “permanent … peace mechanism” and realising the denuclearisation of the Korean peninsula.

The report notes the summit is being held “under the great attention and expectation of the whole world”.

Mr Kim and Mr Trump are now staying in hotels less than a kilometre apart after arriving in Singapore separately on Sunday. Mr Kim is staying at Singapore’s five-star St Regis hotel, while Mr Trump is staying at the nearby Shangri La.

The pair will open their summit with a one-on-one session aided only by translators.

A US official was quoted by the Associated Press on condition of anonymity on Monday as saying the leaders will meet for up to two hours before an expanded bilateral meeting with their respective advisers.

Mr Kim landed at Singapore’s Changi Airport after completing his longest trip overseas as head of state. He has not left his country since taking office in 2011 other than to visit China and the South Korean side of the demilitarised zone on the border.

Travelling with the North Korean leader were top officials including foreign minister Ri Yong-ho, defence minister No Kwang-chol and Kim Yong-chol, a close aide who has been instrumental in the diplomacy that culminated in Tuesday’s summit.

Kim Yo-jong, Mr Kim’s younger sister, was also spotted in his delegation. She led a North Korean delegation to the Winter Olympics in South Korea.

Mr Trump arrived at Singapore’s Paya Lebar Air Base later on Sunday aboard Air Force One after leaving a divisive G7 meeting in Canada.

Mr Kim said “the entire world [was] watching” while Mr Trump said he had a good feeling about the summit.