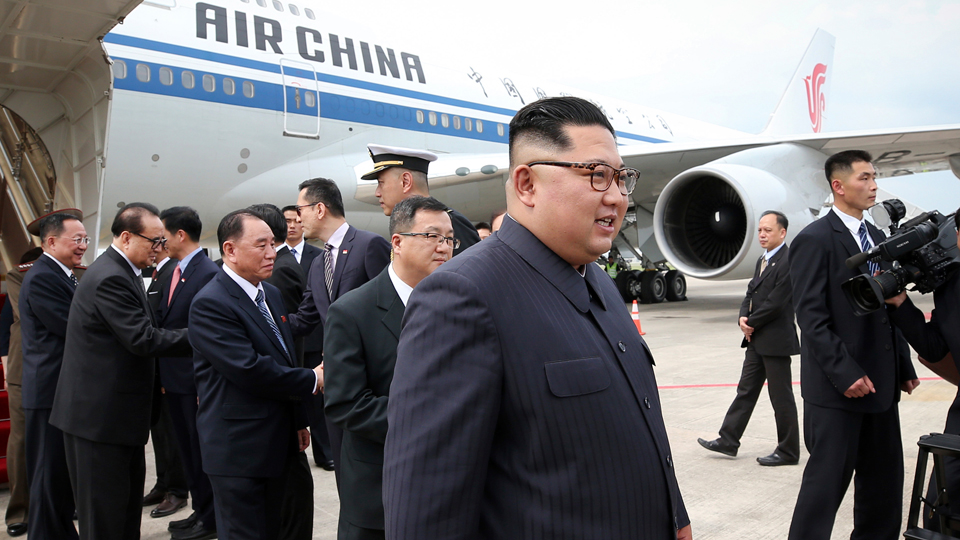 US President Donald Trump and North Korean leader Kim Jong-un have both arrived in Singapore ahead of a historic summit, but their methods of air travel have differed markedly.

Many had expected Mr Kim to fly on his own Soviet-era Ilyushin-62M private jet.

Instead, Mr Kim stepped off an Air China Boeing 747 – a commercial flight –  several hours before the US President arrived, sparking frenzied speculation in the media.

Only hours before, Air China had announced it would resume regular flights to Pyongyang.

Singapore’s minister for foreign affairs Vivian Balakrishnan greeted Mr Kim after he touched down in the island nation.

A large limousine with a North Korean flag could then be seen surrounded by other black vehicles with tinted windows as it sped through the city’s streets to the St Regis Hotel, where China’s President Xi Jinping once stayed.

“The entire world is watching the historic summit between [North Korea] and the United States of America, and thanks to your sincere efforts … we were able to complete the preparations for the historic summit,” Mr Kim told Mr Lee through an interpreter.

Mr Trump is also expected to meet separately with the Singaporean PM, before he and Mr Kim finally meet in person on the island of Sentosa – in what Mr Trump has described as a “one-time shot” at peace.

Washington hopes the summit could be the first step in Mr Kim agreeing to give up his nuclear weapons program. North Korea presumably hopes to ease diplomatic and economic sanctions on Pyongyang.

There has also been speculation the North and South may agree to peace. The two halves of Korea have been technically at war since 1950.

The cost of the summit, reported to be around $US15 million ($A20 million), is to be borne by Singapore, according to Prime Minister Lee, who called it “a cost we are willing to pay”.

Singapore’s Straits Times newspaper reported Mr Lee as saying security costs accounted for about half of the estimated tab.

“It is our contribution to an international endeavour which is in our profound interest,” he said.

He also noted the decision to hold the meeting in Singapore was indicative of its friendly diplomatic ties with two countries that have had historically acrimonious ties.

“The fact that we have been chosen as the site of the meeting – we did not ask for it – says something about Singapore’s relations with the US and North Korea.”