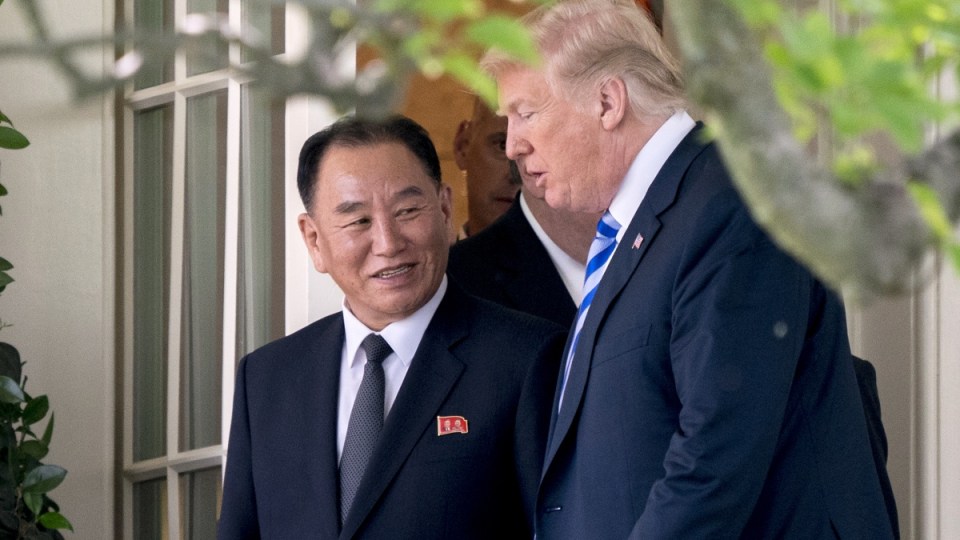 US President Donald Trump says an unprecedented nuclear arms summit with North Korean leader Kim Jong-un that the United States pulled out of will now go ahead as scheduled on June 12 in Singapore, adding another twist to a high-stakes diplomatic dance.

After giving North Korea’s former intelligence chief the rare honour of a meeting in the White House Oval Office, Mr Trump dampened expectations for a breakthrough at the summit, which US officials want to use to press Pyongyang to give up its nuclear weapons arsenal.

“I think it’s probably going to be a very successful, ultimately a successful process,” Mr Trump told reporters on the White House lawn on Friday.

Mr Trump described the Singapore summit as the start of a process and not the place where the two leaders were likely to sign any agreement, a stark contrast to his previous insistence that the summit had to yield real progress toward North Korea’s denuclearisation.

“It’ll be a beginning. I don’t say, and I’ve never said, it happens in one meeting,” Mr Trump added.

.@realdonaldtrump: "We're meeting with the Chairman on June 12th…" pic.twitter.com/b0sEBbTkPf

His comments represented an extraordinary change in tone towards North Korea from a president who last year threatened to rain “fire and fury” on the country because of the threat its nuclear weapons and missiles pose to the US.

Mr Trump even backed away from the words “maximum pressure” that his administration had used to describe its approach to North Korea, combining the toughest-ever US and international economic sanctions with diplomatic actions and the Republican president’s military threats and preparations.

“We’re getting along, so it’s not a question of maximum pressure,” Mr Trump said. “At some point, hopefully … for the good of millions of people, a deal will be worked out.”

Mr Trump said it could take several meetings to reach an agreement.

The envoy, who has been linked by US intelligence to a high-profile cyber attack on Sony Pictures in 2014, delivered a letter from Kim Jong-un to Mr Trump.

A senior White House official said Mr Trump had read the letter but there was no word yet on the contents.

Mr Trump said one thing that could come out of the summit was an agreement formally ending the 1950-53 Korean War, which was concluded only with a truce, not a peace treaty.

“We are going to discuss it prior to the meeting. That’s something that could come out of the meeting,” Mr Trump said when asked if a document ending the war was bring prepared.

Mr Trump said North Korea’s human rights record was not discussed at the meeting.  He wants North Korea to “denuclearise”, meaning to get rid of its nuclear arms, in return for relief from economic sanctions.

But the leadership in Pyongyang is believed to regard nuclear weapons as crucial to its survival and has rejected unilaterally disarming.

“I cancelled it in response to a very tough statement, and I think we’re over that, totally over that,” Mr Trump said on Friday.

The North Korean envoy, Kim Yong-chol, is the highest level figure from the reclusive country to hold talks at the White House since 2000.

Mr Trump met him in the Oval Office for about 90 minutes. The pair could be seen chatting on the White House grounds following the meeting.

Mr Trump patted him on the arm and walked him to his vehicle.