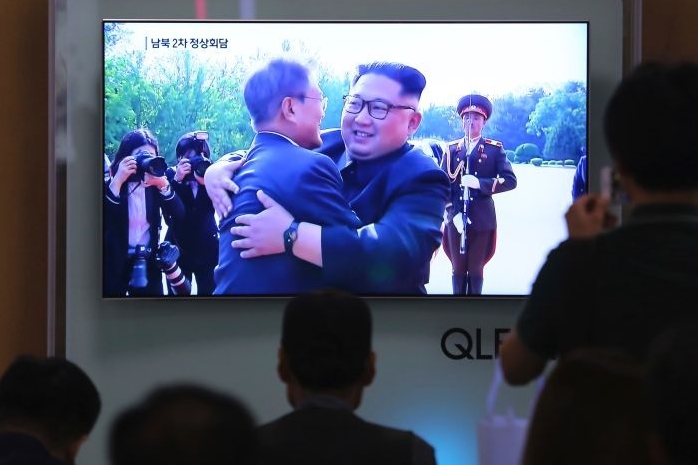 The leaders of North and South Korea have met for a second time to discuss implementing the peace commitments made at their first talks last month, and the possibility of putting a North Korea-US summit back on track, the presidency in Seoul said.

North Korean leader Kim Jong Un and South Korean President Moon Jae In came together on Saturday for a previously unannounced meeting at the ‘truce village’ of Panmunjom, which lies in the heavily guarded demilitarised zone.

The village was also the site of their April 27 summit, in which the two leaders agreed to pursue a set of shared goals, including a nuclear-free Korean Peninsula and an official end to the Korean War, which has technically been ongoing despite a 1953 armistice.

The results of their latest talks will be released on Sunday, a South Korean presidential spokesman said. Moon will hold a press conference to explain the outcome.

A photo released by the South Korean presidential office showed Moon and Kim hugging at the conclusion of their discussions.

The negotiations come amid doubts over a potential landmark meeting between Kim and US President Donald Trump.On Thursday, the White House called off a June 12 summit with Kim in Singapore, citing “tremendous anger and open hostility” from Pyongyang.

But Trump tweeted late Friday that his administration was “having very productive talks with North Korea about reinstating the summit” for the same time and place.

Also on Friday US Secretary of State Mike Pompeo spoke by telephone with his South Korean counterpart, Kang Kyung Wha, in which he said Washington still wished to have dialogue with Pyongyang.

The thaw between North and South Korea comes after a tense 2017, in which multiple missile tests by North Korea prompted an international outcry and an exchange of insults and threats between Kim and Trump.

At their April summit, Kim expressed his willingness to scrap his country’s nuclear program – which would include its nuclear weapons – and pursue meetings with the US and China.

It was only the third-ever such meeting. Kim’s father, Kim Jong Il, held meetings with his South Korean counterparts in 2000 and 2007.

Kim has launched a diplomatic offensive since the beginning of the year, meeting not only with Moon but also Chinese President Xi Jinping in Beijing.