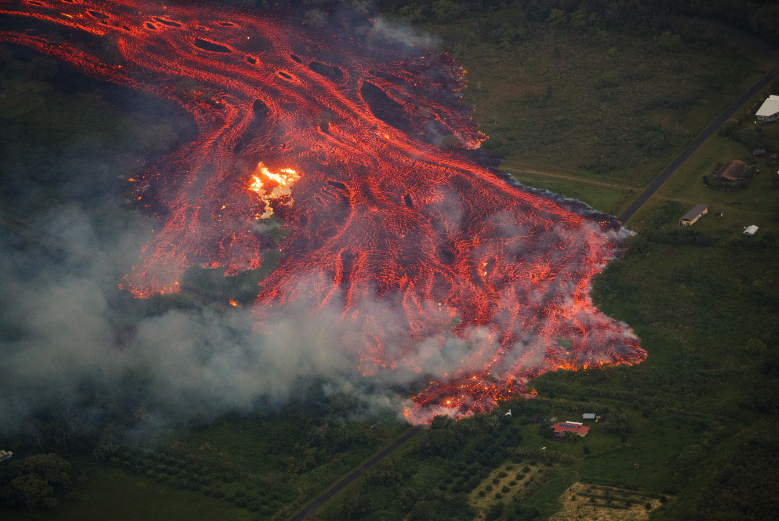 Lava oozing towards a key Hawaii highway threatens to sever a vital escape for residents trapped between the magma-spewing Kilauea volcano and the coast.

Molten rock from two huge cracks merged into a single stream and is expected to hit coastal Highway 137, the County of Hawaii’s Civil Defense Agency said on Saturday.

Authorities are trying to open up a road blocked by a 2014 lava flow to serve as an alternative escape route should Highway 137 or another exit route, Highway 130, be blocked, Jessica Ferracane of the National Park Service told reporters.

The Hawaii National Guard has warned of mandatory evacuations that would affect thousands of Hawaiians should either road be blocked.

For weeks, geologists have warned that hotter, fresher magma from Kilauea’s summit would run underground and emerge some 40km in the lower Puna district, where older, cooler lava has already destroyed 44 homes and other structures.

“Summit magma has arrived,” said US Geological Survey scientist Wendy Stovall said on a conference call with reporters on Saturday.

“There is much more stuff coming out of the ground and its going to produce flows that will move much further away.”

Scientists expect a series of explosive eruptions from Kilauea, one of the world’s most active volcanoes, that could spread ash and volcanic smog across the Big Island, the southernmost of the Hawaiian archipelago.

That could pose a hazard to aircraft if it blows into their routes at around 30,000 feet.