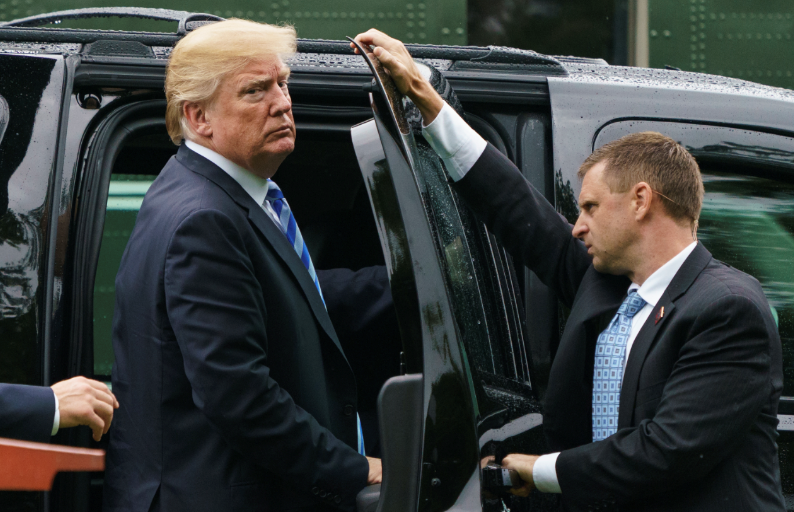 A scowling Donald Trump heads back to the White House after a hospital visit with wife Melania, whose name he later misspelled. Photo: AP/Carolyn Kaster

US President Donald Trump has welcomed the return of his wife Melania to the White House after a hospital stay for kidney treatment but misspelled her name in a tweet.

Mr Trump heralded her homecoming with a message on Twitter that referred to her as ‘Melanie’.

“Great to have our incredible First Lady back home in the White House. Melanie is feeling and doing really well. Thank you for all of your prayers and best wishes!”

Mr Trump then quickly replaced that tweet with another that spelled his wife’s name correctly.

But there was plenty of reaction to the original tweet, including from London School of Economics academic Brian Klass, who said: “‘Melanie.’ Just…wow.”

Mrs Trump’s quiet return to the White House after five days at a nearby military hospital resolved a brewing mystery about when she would eventually be released.

Ms Grisham said on Monday that the medical procedure was “successful” and there were no complications.

“She is resting comfortably and remains in high spirits. Our office has received thousands of calls and emails wishing Mrs Trump well, and we thank everyone who has taken the time to reach out.”

Mrs Trump had been at Walter Reed National Military Medical Center near Washington since Monday, when she underwent a procedure to treat an unspecified kidney condition that the White House described as “benign”.

First ladies are under no obligation to make their medical histories public.

Word of the hospitalisation came as a surprise as Mrs Trump appeared well and healthy during her public appearances in recent weeks, including a state visit by the French President and his wife, and her attendance at the funeral of former lady Barbara Bush.