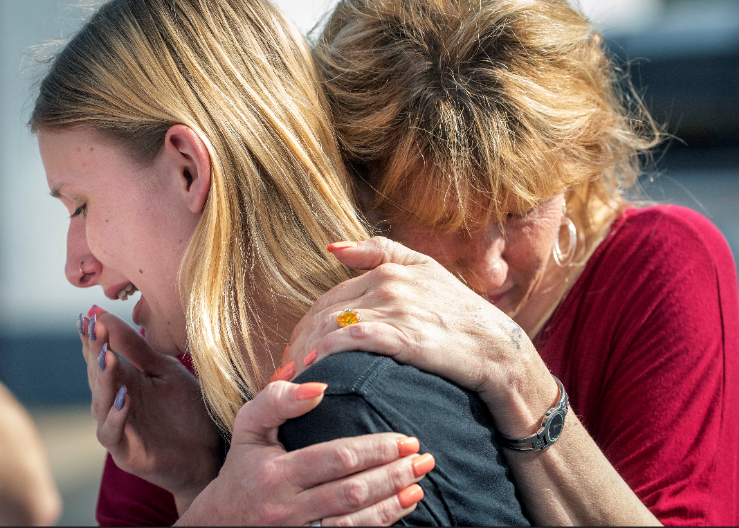 Texas officials have charged a 17-year-old student with murder following the shooting of 10 people, including fellow pupils, at his high school in an attack similar to the massacre at a Florida high school earlier this year.

Dimitrios Pagourtzis allegedly opened fire in a classroom at the Santa Fe High School located 48km southeast of Houston shortly before 11pm on Friday (8am local time on Friday), creating a mass panic after classmates were wounded and a fire alarm triggered a full evacuation.

The Galveston County Sheriff’s Office identified Pagourtzis and said he had been charged with capital murder in a post on its Facebook page. More charges could follow and another two people are in custody.

Pagourtzis was denied bail at a brief court appearance on Saturday (Friday afternoon local time), where he appeared shackled and wearing a green prison jumpsuit.

He spoke in a soft voice and said “Yes sir” when asked if he wanted a court-appointed lawyer, along with other questions.

Texas Governor Greg Abbott said 10 people were killed and another 10 were injured making this the fourth deadliest mass shooting at a US public school.

Citing a review of Pagourtzis’ journals located during raids on two homes, Governor Abbott told reporters: “Not only did he want to commit the shooting, but he wanted to commit suicide after the shooting”.

“He didn’t have the courage to commit suicide.”

He said investigators had seen a T-shirt on the suspect’s Facebook page that read “Born to Kill”.

Witnesses told local TV networks the shooting began after Pagourtzis allegedly burst through the door of an art class wearing a long trench coat and yelled “surprise!” before opening fire.

Courtney Marshall, 15, who was inside the art class said she wanted to take care of her friends.

“I wanted to take care of my friends, but I knew I had to get out of there,” Marshall said, saying that she saw at least one person hit. “I knew the guy behind me was dead.”

Harris County Sheriff Ed Gonzalez said explosive devices had been found at the school and off campus during searches of the two homes and vehicles.

“Law enforcement is in the process of rendering them safe,” he tweeted. “School has been evacuated.”

Pagourtzis, a reportedly “quiet student who kept to himself”, plays on the Santa Fe High School junior varsity football team, and is a member of a dance squad with a local Greek Orthodox church.

Governor Abbott said Pagourtzis  was allegedly armed with a shotgun and a .38 calibre revolver which he did not legally possess and were reportedly owned by his father.

Aerial video outside the school broadcast on local TV showed police escorting lines of students out of the building and then searching them for weapons as many police cars and at least two ambulances with lights flashing stood by.

Sophomore Leila Butler told the local ABC affiliate that fire alarms went off at about 7.45am local time and students left their classrooms.

A male student, who did not identify himself, described fleeing the scene in an interview with CBS affiliate KHOU.

“Three shots that I heard, so we all took off in the back and I tried to get into the trees, I didn’t want to be in sight. I heard four more shots, and then we jumped the fence to somebody’s house,” the student said.

Another sophomore, Dakota Shrader, told Fox 26 TV her 17-year-old girlfriend told her by phone that she was wounded but was recovering in a hospital. “My friend got injured,” said an emotional Shrader. “Her leg, she got shot in the leg.”

US President Donald Trump called the latest school massacre heartbreaking, posting on Twitter that “we are with you in this tragic hour”.

“My administration is determined to do everything in our power to protect our students, secure our schools and to keep weapons out of the hands of those who pose a threat to themselves and to others,” Mr Trump said at the White House.

We grieve for the terrible loss of life, and send our support and love to everyone affected by this horrible attack in Texas. To the students, families, teachers and personnel at Santa Fe High School – we are with you in this tragic hour, and we will be with you forever… pic.twitter.com/LtJ0D29Hsv

Days after the Parkland shooting, Mr Trump said that elected officials should be ready to “fight” the powerful National Rifle Association lobby group. Early this month he embraced that group, telling its annual meeting in Dallas “your Second Amendment rights are under siege”.

The Second Amendment of the US Constitution protects the right to bear arms.