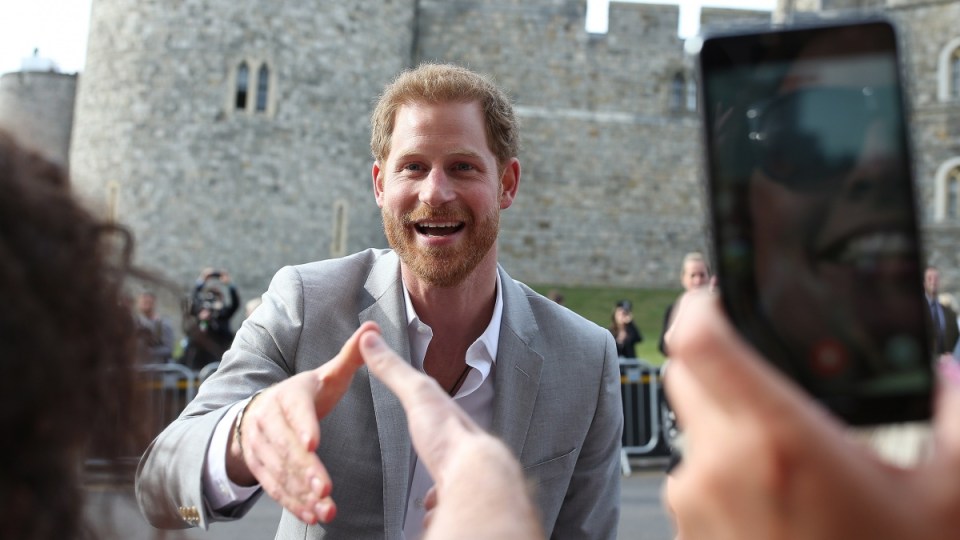 Harry went on a last-minute surprise walkabout in Windsor, chatting to local school children and even accepting a small teddy bear. Photo: AAP

Harry is looking “relaxed” during a surprise walkabout at Windsor and Meghan is feeling “wonderful” offering up a radiant smile on the eve of her wedding after final preparations for their big day.

The US actress’ comment came as she strode with her mother Doria Ragland by her side into the $3687-a-night Cliveden House Hotel in Berkshire where she will emerge on Saturday evening (Saturday morning local time) as a bride in her wedding gown.

As Meghan was being welcomed to the hotel, Harry and brother and best man Prince William, the Duke of Cambridge, went on a surprise walkabout in Windsor to meet the crowds, with Harry seen crouching down and chatting to local children, asking one little boy had he been waiting long and what school he attended.

Harry, staying with William at Coworth Park on the other side of Windsor, was greeted with shouts of “good luck!” from well-wishers, according to the BBC, spending nearly 10 minutes chatting to the crowds.

Just before he went back into Windsor Castle, he was asked how he was feeling and said: “Relaxed, of course”, the BBC reported. He asked people where they were from and was also given a small teddy bear as a good luck gift.

As Meghan and Ms Ragland – the first sighting of her since she arrived in the UK on Wednesday – emerged from a dark coloured Range Rover in the driveway of the hotel, a reporter asked her how she was feeling, and she replied: “Wonderful, thank you”.

Meghan, 36, wearing a Roland Mouret outfit, and Ms Ragland, 61, both looked sleek and glamorous, dressed in high heels, having just come from meeting the head of state and a final wedding rehearsal.

The mother and daughter were joined at the hotel, which overlooks the River Thames at Taplow, by a trusted team of three helpers who will prepare the bride for her appearance in front of a global television audience of millions on Saturday evening (Saturday morning local time).

They are staying in a wing of the hotel and a small marquee has been erected over the entrance to stop anyone getting a picture of the dress ahead of the bride’s appearance at St George’s Chapel at Windsor Castle.

Underneath confident exteriors, Meghan and Harry are both said to be suffering the “normal nerves” of any couple getting married.

“They are both ready. The last couple of days all their friends have been arriving. I think everything has started to feel very real after a long time planning, ” one source said.

All weddings are complicated to plan and something on this scale is completely different. They have made every decision.”

Meghan’s has had a difficult week after her father Thomas Markle dropped out of the wedding following heart surgery and the furore surrounding his alleged staging of paparazzi pictures of himself.

This has meant Ms Ragland, a social worker and yoga instructor who lives in Los Angeles, is now the only member of Meghan’s family who will be attending the wedding.

For the British, Cliveden is a house that will forever be associated with scandal.

The hotel’s own website boasts of its “history of unapologetic debauchery”, and tells how the Profumo affair began when government minister John Profumo met Christine Keeler at a swimming pool party in the grounds. The hotel even offers a Profumo Affair Break.

Happy days! Harry and Meghan out and about