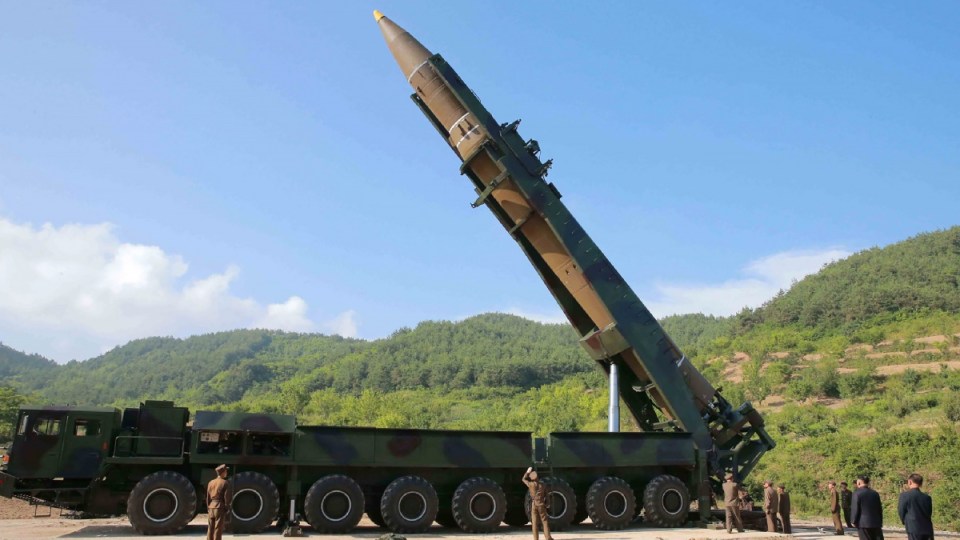 North Korea has threatened to cancel the summit if forced to lose nuclear weapons. Photo: Getty

US President Donald Trump has refused to back down on demands that North Korea give up its nuclear weapons despite Pyongyang’s threat to pull out of a planned summit.

The historic summit between North Korean leader Kim Jong-un and Mr Trump is in doubt after Pyongyang warned Wednesday that US demands that it unilaterally abandon its nuclear arsenal could prompt it to cancel the June 12 meeting.

“We’ll have to see,” Mr Trump told reporters on Thursday morning (AEST) in the Oval Office when asked if the summit with Mr Kim would go ahead.

“No decision, we haven’t been notified at all…. We haven’t seen anything, we haven’t heard anything,” he added, while saying that he would continue to push for the denuclearisation of the Korean Peninsula.

Reporter: Is the North Korea summit still on?

Cancellation of the summit, the first meeting between a serving US president and a North Korean leader, would deal a major blow to what would be the biggest diplomatic achievement of Mr Trump’s presidency.

Mr Trump has raised expectations for success even as many analysts have been sceptical about the chances of bridging the gap because of questions about North Korea’s willingness to give up a nuclear arsenal that it says can hit the US.

The White House said earlier it was still hopeful the summit would take place, but Mr Trump was prepared for a tough negotiation.

“If it doesn’t, we’ll continue the maximum pressure campaign that’s been ongoing.”

Ms Sanders said the North Korean demands were “not something that is out of the ordinary in these types of operations”.

North Korea’s first vice minister of foreign affairs, Kim Kye-gwan, on Wednesday cast doubt on whether the planned meeting between leader Kim and Mr Trump, which is set for Singapore, would be held.

“If the US is trying to drive us into a corner to force our unilateral nuclear abandonment, we will no longer be interested in such dialogue and cannot but reconsider our proceeding to the … summit,” he said.

He specifically criticised US National Security Adviser John Bolton, who has called for North Korea to quickly give up its nuclear arsenal in a deal that would mirror Libya’s abandonment of its program for weapons of mass destruction.

Ms Sanders appeared reluctant to endorse the Libya model that the outspoken and hawkish Mr Bolton has touted, most recently on US television on Sunday.

She said the model that would be followed in dealing with North Korea was “the President Trump model”.

“He’s going to run this the way he sees fit. We’re 100 per cent confident … he’s the best negotiator.”

A US official said the North Korean statements had taken the White House off guard after North Korean leader Kim’s diplomatic outreach to the US and South Korea.

China has urged Pyongyang to go ahead with the summit saying the meeting would yield “substantial outcomes”.

“Only in this way can we consolidate the alleviation of the situation and maintain peace and stability in the region,” China’s Foreign ministry spokesman Lu Kang  said at a regularly scheduled news briefing on Wednesday.