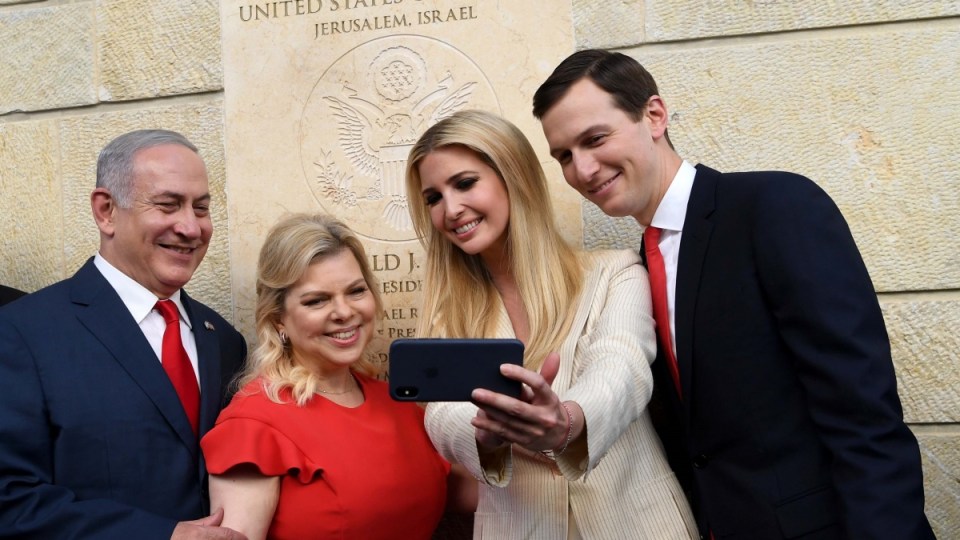 Ivanka Trump and Jared Kushner pose outside the new US embassy with Israeli Prime Minister Benjamin Netanyau and his wife. Photo: AAP

Ivanka Trump has been condemned over a series of photos that show her smiling and celebrating in Jerusalem on the same day 60 Palestinians were shot and killed in violent protests in nearby Gaza.

Ms Trump, the daughter of United States President Donald Trump, was in Jerusalem with her husband, Jared Kushner, to open the new US embassy in Israel.

The relocation of the embassy from Tel Aviv to Jerusalem enraged Palestinians, who interpreted the move as the US siding with Israel in an ancient territorial dispute. Both Israelis and Palestinians claim Jerusalem as their rightful capital.

“We welcome you officially, and for the first time, to the embassy of the United States here in Jerusalem, the capital of Israel,” Ms Trump said, in an eerily upbeat toast that led director Judd Apatow to ask on Twitter, “Is this the trailer to a horror film?”.

As the blissfully unaware Ms Trump posed for photos, the Israeli army opened fire on Palestinian protestors on the Gaza border amid violent protests sparked by the embassy’s relocation.

An eight-month-old baby, who died in a tear gas attack, was one of 60 who were killed, and more than 2000 others were injured on the deadliest day in six weeks of protests.

The international community immediately condemned Israel’s use of force on the mostly unarmed protestors, with many nations deeming it a violation of international law.

Meanwhile, front pages around the world and those on social media lambasted Ms Trump for her apparent lack of awareness and questioned why she and Mr Kushner were attending in the first place.

Ivanka Trump, who claims to advocates for children and families, was all smiles celebrating in Jerusalem as mothers and children were being killed just in the border with Gaza. pic.twitter.com/IhIYmw7HvF

Others were simply struck by the juxtaposition of the images of Ms Trump in her all-white outfit beaming for the crowd next to images of bloodied, distraught protestors grieving their friends and loved ones.

Comedian Chelsea Handler tweeted: “I’m glad Ivanka and Jared could take time away from their busy schedules of not being qualified to represent the US to go represent the US, and celebrate moving the capital in exchange for the Adelson’s donations, while 50+ Palestinians have been killed.”

Both Mr Kushner and Ms Trump are mere senior advisers to the President and neither are official US diplomats.

Steve Schmidt, the senior strategist behind John McCain’s 2008 president campaign, aired his disapproval of their presence at the important event, writing online: “Kushner and Ivanka’s presence and public roles at this Jerusalem embassy opening are outlandish.

“They are assistants to the President. They have no business and no rank to be speaking for the country at a geopolitical flash point. We don’t have princes and princesses in America.”