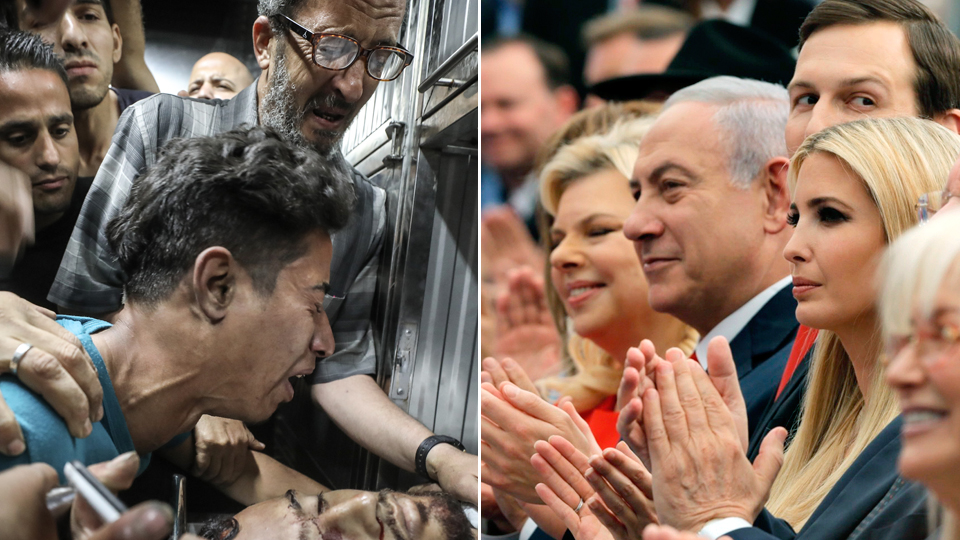 Amid violent and deadly protests in Gaza, the Australian government has urged both Israel and Palestine to turn down the heat.

Israeli forces shot and killed at least 55 Palestinians and wounded more than 1200 during mass protests on Monday along the Gaza border.

A few kilometres away, Israel and the US held a festive inauguration ceremony for the new American embassy in contested Jerusalem.

It was by far the deadliest day of cross-border violence since a devastating 2014 war between Israel and Gaza’s Hamas rulers.

“Any loss of life is tragic in these circumstances,” Mr Turnbull told 3AW radio on Tuesday.

Several Palestinians have been killed and hundreds injured as protest in Gaza turn violent. https://t.co/YAnpX6dyY7 pic.twitter.com/OVh345V8zT

“We recognise that Israel has legitimate security concerns and needs to protect its population, and we call on Israel to be proportionate in its response and refrain from excessive use of force,” Ms Bishop said.

“Australia urges Palestinian protesters to refrain from violence and attempting to enter into Israeli territory during the March of Return.”

Ms Bishop said the violence underlines the importance of a return to negotiations toward a two-state solution and peace.

Opposition Leader Bill Shorten called on both sides to de-escalate the situation.

“When you see the death of children, no good comes of that. That’s a disaster,” he told reporters in Brisbane.

Meanwhile, former prime minister Tony Abbott believes Australia should follow the US lead and shift its embassy to Jerusalem.

Mr Turnbull confirmed there were no plans to move Australia’s embassy from Tel Aviv.

“It’s not helpful for a two-state solution for there to be unilateral declarations in respect to that contested territory.”

Deaths are tragic, PM says, as Gaza turmoil rolls on