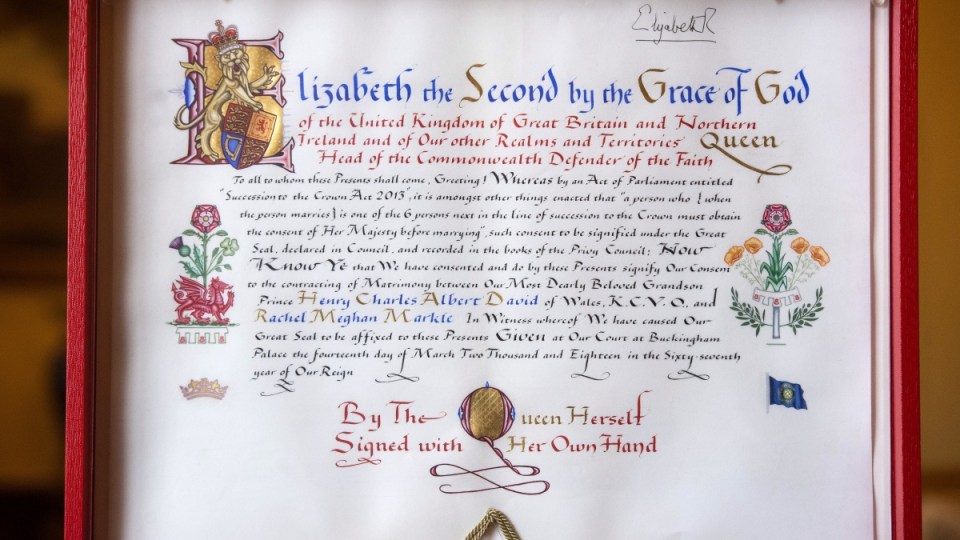 Buckingham Palace has released an image of the handwritten document in which the Queen gives her consent to Prince Harry to marry American Meghan Markle.

The Instrument of Consent image was released on Saturday – a week before Prince Harry is to marry the US actress in St George’s Chapel in Windsor.

While it may have seemed the Queen was cutting it fine for timing, the BBC reported the British monarch had in fact signed the document back in March.

The document, illuminated on vellum, features a design to the left of the text that incorporates a red dragon, the symbol of Wales, a rose for England, a thistle for Scotland and a shamrock for Ireland. The design to the right, for Meghan, features a rose, the national flower of the US, and golden poppies for her home state of California.

“Now know ye that we have consented and do by these presents signify our consent to the contracting of matrimony between our most dearly beloved grandson Prince Henry Charles Albert David of Wales KCVO and Rachel Meghan Markle,” the document reads.

The absence of the words “most dearly beloved” for Meghan was deemed a slur by some royal watchers. But Emily Nash, royal correspondent for Hello magazine, said the term was reserved for British citizens.

“For anyone wondering why Meghan is not described as ‘most trusty and well-beloved’ like Kate was, it’s because that term is only used for citizens of Britain or the Queen’s overseas Realms,” Nash wrote on Twitter.

“Meghan is not yet a British citizen.”

Under British law, the first six people in line of succession to the throne must obtain the Queen’s permission. When Harry was engaged, he was fifth in line, but has since been bumped to sixth with the birth of Prince Louis last month.

If the Queen had not given her consent to the marriage, Prince Harry could still have wed, but he would have been disqualified from the line of succession to the throne.