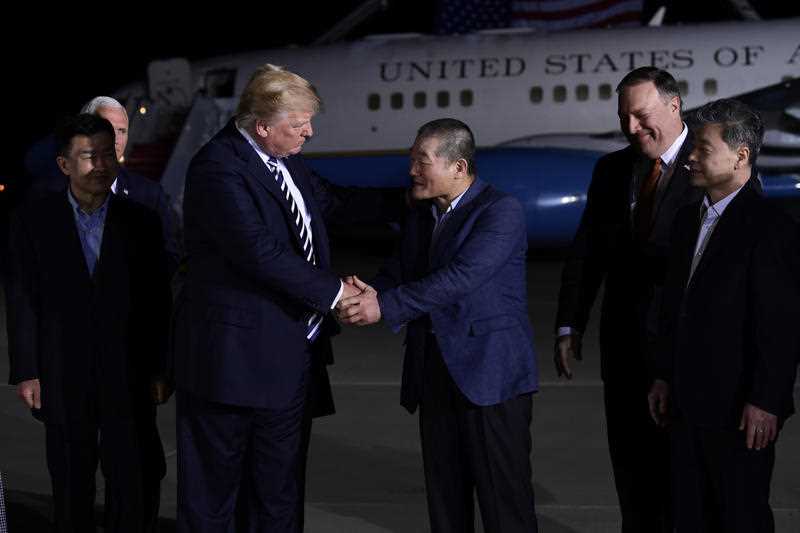 US President Donald Trump has welcomed three former US prisoners at a military base near Washington, thanking North Korean leader Kim Jong-un for their release and sounding upbeat on a planned summit between the two sides.

The prisoners, freed after US Secretary of State Mike Pompeo travelled to the North Korean capital, landed at Joint Base Andrews outside Washington, where a giant US flag was suspended between ladders of two fire trucks on the edge of the taxiway.

Mr Trump and his wife, Melania, boarded the plane for about five minutes before the men stepped out, shaking hands with the president and waving to waiting media and military personnel.

“Frankly we didn’t think it was going to happen and it did,” Mr Trump said after thanking Mr Kim for releasing the men.

“We’re starting off on a new footing. This is a wonderful thing that he released the folks early.”

Mr Trump said he believed Mr Kim wanted to bring North Korea “into the real world” and was hopeful of a major breakthrough at their planned meeting.

“I think we have a very good chance of doing something very meaningful,” Mr Trump said.

“My proudest achievement will be – this is part of it – when we denuclearise that entire peninsula.”

Mr Trump and Mr Kim engaged in a bellicose exchange of rhetoric last year over North Korea’s development of nuclear missiles capable of reaching the United States in defiance of UN Security Council resolutions. Tensions began to ease, coinciding with the North’s participation in the Winter Olympics in South Korea in February.

Details of the planned summit have yet to be announced, but one US official said Singapore had emerged as the most likely venue. Mr Trump said it would be held in a few weeks’ time.

A White House spokeswoman said the three former prisoners would be taken to Walter Reed National Military Medical Centre in nearby Maryland for further medical evaluation.

They are Korean-American missionary Kim Dong-chul, detained in 2015 and sentenced in 2016 to 10 years’ hard labour; Kim Sang-duk, also known as Tony Kim, who spent a month teaching at the foreign-funded Pyongyang University of Science and Technology (PUST) before he was arrested in 2017; and Kim Hak-song, who also taught at PUST and was detained last year.

“I was treated in many different ways, but overall I had to do much labour and when I became ill I received some treatment,” Kim Dong-chul said via a translator.

The three earlier gave their thanks in a statement released by the State Department as their plane stopped over in Alaska.

“God Bless America, the greatest nation in the world.”

North Korean state media said they were arrested either for subversion or “hostile acts” against the government.

The release of the last US detainees in North Korea appeared to signal an effort by Mr Kim to improve the tone for the summit and followed his recent pledge to suspend missile tests and shut a nuclear bomb test site.