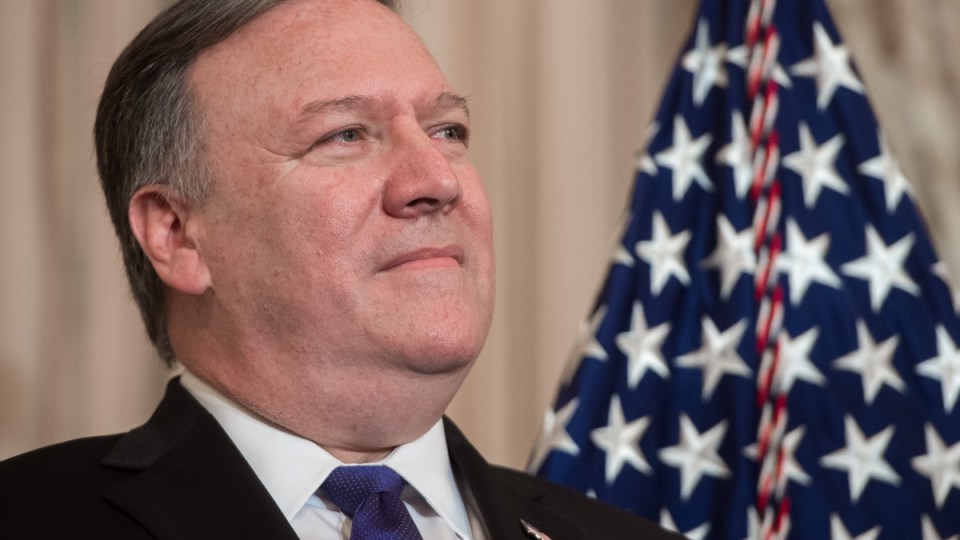 Mike Pompeo is making his way to North Korea to prepare for the summit between Donald Trump and Kim Jong Un. Photo: Getty

Mr Trump revealed Wednesday morning that Mr Pompeo was making his second visit to North Korea in less than six weeks and that the two countries had already agreed on a date and location for the unprecedented summit.

The President stopped short of providing details of his upcoming meeting.

In what is emerging as a political and strategic tug-of-war, Mr Pompeo’s visit comes just a day after Kim visited China to meet President Xi Jinping, their second encounter in two months.

Mr Xi and Kim met on Monday and Tuesday in the coastal city of Dalian as China looks to show the world it has an indispensable role in seeking a lasting solution to tension over North Korea’s pursuit of nuclear weapons.

During the visit, announced only after it was over, Kim told Mr Xi he hoped relevant parties would take “phased” and “synchronised” measures to realise denuclearisation and lasting peace on the Korean peninsula.

“So long as relevant parties eliminate hostile policies and security threats toward North Korea, North Korea has no need for nuclear, and denuclearisation can be realised,” China’s official Xinhua news agency cited Kim as saying.

Mr Trump on Wednesday said it would be a “great thing” if the three Americans presently detained in North Korea were freed as a goodwill gesture.

However, Mr Pompeo told reporters while en route to Pyongyang that he had not received a commitment for their release, but hoped North Korea would “do the right thing”.

The Americans’ release could signal an effort by Kim to set a more positive tone for the summit, which is expected to be held in late May or early June, following his recent pledge to suspend missile tests and shut Pyongyang’s nuclear bomb test site.

While Kim would be giving up the last of his American prisoners, whom North Korea has often used as bargaining chips with the United States, a release could also be aimed at pressuring Mr Trump to make concessions of his own in his bid to get Pyongyang to abandon its nuclear arsenal, something it has not signalled a willingness to do.

“Plans are being made, relationships are building,” Mr Trump said of the planned summit during remarks otherwise focused on his decision to pull the United States out of the 2015 Iran nuclear deal.

Hopefully, a deal will happen. And with the help of China, South Korea and Japan, a future of great prosperity and security can be achieved for everyone.”

Mr Pompeo made a secret visit to North Korea over the Easter weekend, becoming the first US official known to have met Kim, to lay the groundwork for the planned summit. The meeting occurred before Mr Pompeo’s Senate confirmation as secretary of state.

Mr Trump suggested that dropping out of the Iran nuclear accord, which he has frequently denounced as a bad deal, would send a “critical message” not just to Tehran but also to Pyongyang.

“The United States no longer makes empty threats. When I make promises, I keep them,” Mr Trump said.

But critics of Mr Trump’s decision to leave the Iran deal say it could undermine his credibility in North Korea’s eyes, fuelling doubts whether he would abide by any nuclear agreement.