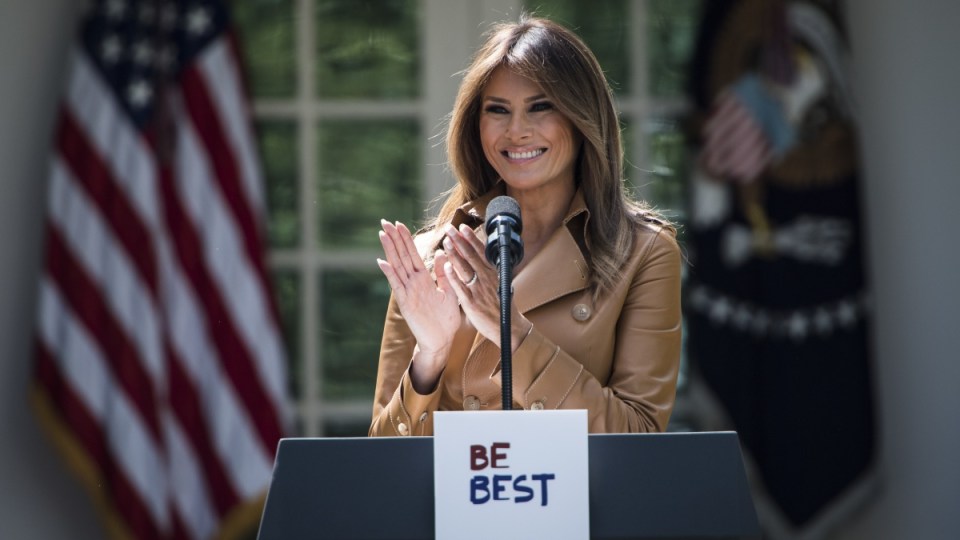 Melania Trump has again been accused of plagiarising the Obamas. Photo: Getty

Melania Trump is facing fresh claims of plagiarism after the launch of her new online safety for children “Be Best” campaign on Tuesday.

Several news outlets reported that text and graphics from a booklet put out by Mrs Trump drew similarities to one published under the Obama administration.

It is the second time Mrs Trump has been accused of plagiarising from the Obamas, after she delivered a speech in 2016 that bore striking resemblance to a 2008 address by Michelle Obama.

The “Be Best” campaign aims to teach children the importance of social, emotional and physical health, according to a White House statement on Monday.

lmao… the White House/Melania Trump Be Best pamphlet about your kids being online is almost the exact same thing that the FTC published in Jan. 2014:

“The three main pillars of ‘Be Best’ will include wellbeing, social media use, and opioid abuse,” Melania Trump, who initially pledged to fight online bullying in the final days of the 2016 presidential election, said at the campaign launch in the White House Rose Garden.

NBC’s Michael Cappetta tweeted that the title of the initiative echoed Mrs Obama’s advice to men at the United States of Women summit in 2016, when she encouraged them to “be better” in the fight for women’s empowerment.

The Democrat’s post linked to a tweet which showed the First Lady’s booklet for her new campaign reused a page from a booklet the Obamas published in 2014 called Talking to Your Kids.

In 2016, Michelle Obama encouraged men to "Be Better" pic.twitter.com/RtSz1tmETO

Prior to the initiative’s launch, White House press secretary Sarah Huckabee Sanders dodged repeated questions on whether it was appropriate for the first lady to be advocating against cyberbullying given her husband’s history of insulting people online.

“The idea that you are trying to blame cyberbullying on the President is ridiculous,” Ms Sanders told reporters Monday.

A White House statement on Tuesday accused “opposition media of taking a day meant to promote kindness and positive efforts on behalf of children, to instead lob baseless accusations towards the First Lady and her new initiatives”.

Donald Trump embraced his wife after she finished her speech and kissed her cheeks five times in a rare public display of affection before holding hands as they walked back into the Oval Office.

“America is truly blessed to have a first lady who is so devoted to our country and to our children,” Mr Trump said before signing a declaration that Monday was “Be Best” day.