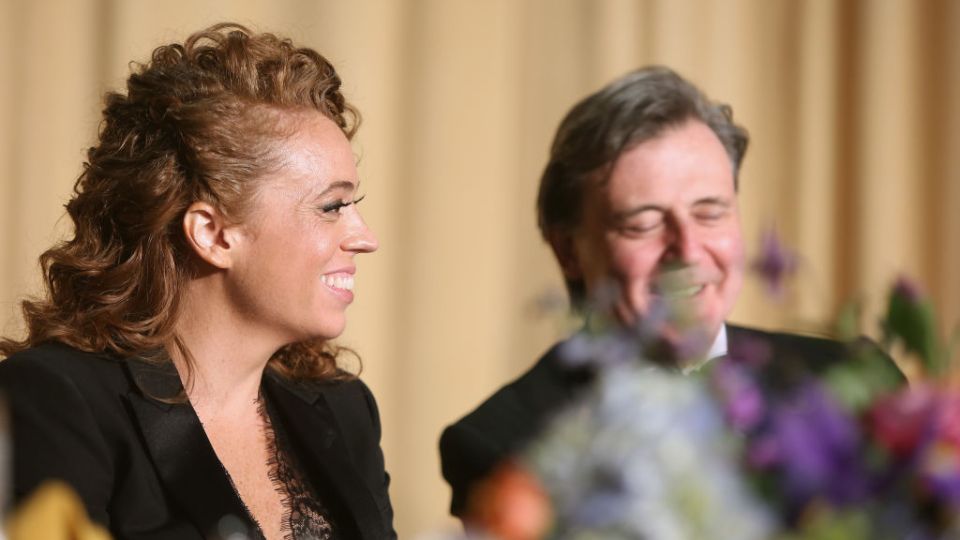 Comedian and The Daily Show contributor Michelle Wolf went after just about everyone in this year’s White House correspondents’ dinner roast.

US media outlets have described Wolf’s performance as delivering a “harsh and risque” critique, while some Trump supporters saw it as another victory for the President, who declined to attend.

An R/X rated spectacle that started poorly and ended up in the bottom of the canyon. Another victory for @realDonaldTrump for not attending and proving his point once again. The room was uncomfortable. Trump lovers and even a large number of Trump haters were pretty miserable.

Here were some of the highlights from the night.

There were a few references to Stormy Daniels

And a bit of awkwardness with Sarah Sanders

Wolf did not hold back in roasting the White House press secretary, who remained stoic as the comedian made a few jokes at her expense.

Ms Sanders sat in Mr Trump’s place at the event, with the President skipping the event to attend a rally in Washington, Michigan, instead.

These were just a couple of the lines:

“I think she’s very resourceful, like she burns facts and then she uses that ash to create a perfect smokey eye. Maybe she’s born with it, maybe it’s lies.”

“I’m never sure what to call Sarah Sanders … what’s Uncle Tom but for white women who disappoints other white women. Oh I know Ann Coulter.”

That last line is a reference to US conservative and political commentator Ann Coulter.

But New York Times reporter Maggie Haberman, who was honoured during the dinner for her reporting, praised Sanders for staying in her seat and not walking out.

There was even a reference to The Handmaid’s Tale

Wolf compared Ms Sanders to a character from the popular dystopian television show:

“We are graced with Sarah’s presence tonight. I have to say I’m a little star struck I love you as Aunt Lydia in The Handmaids Tale,” she said.

Aunt Lydia is a fearsome figure who works at a re-education school and teaches the main character, Offred, and other women about how to become Handmaids.

And Mike Pence was told to check it out

“Mike Pence if you haven’t seen [The Handmaid’s Tale], you would love it.”

Then there was Donald Trump

He might have been absent from the event, but Wolf still had a few things to say about Mr Trump.

“Mr President, I don’t think you’re very rich. Like, you might be rich in Idaho, but in New York, you’re doing fine.”

“Trump is the only person that watches Who Wants to Be a Millionaire and thinks, ‘me’. Although I’m not sure you wouldn’t get very far. He’d get to like the third question and be like I have to phone a fox and friend.”

Then there was a couple “Trump’s so broke” jokes, which included a “too soon” reference to the deadly explosion of an engine on a Southwest airline.

And the media’s obsession with the US President

While Mr Trump and his administration were the focus of the speech, the media were also the subject of a few jokes.

“You guys are obsessed with Trump. Did you used to date him? Because you pretend like you hate him, but I think you love him.”

“I think what no one in this room wants to admit is that Trump has helped all of you.”

Hillary Clinton was roasted for her 2016 campaign

“Democrats are harder to make fun of because you guys don’t do anything. People think you might flip the House and Senate this November, but you guys always find a way to mess it up. You’re somehow going to lose by 12 points to a guy named Jeff Paedophile, Nazi doctor.”

Former White House press secretary Sean Spicer shared a photo of White House staff. It’s quite a turnaround from even a year ago when no one from the Trump administration attended the dinner.

Mr Spicer also stood next to Ms Sanders, with both appearing quite happy despite the latter now serving as press secretary.

Mr Scaramucci was fired from the role 10 days later.

The best lines from the White House correspondents’ dinner