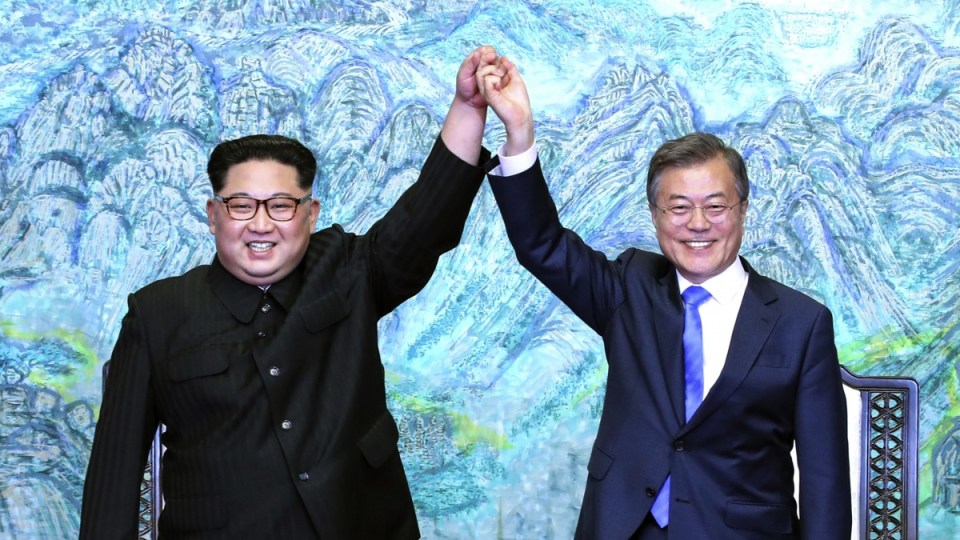 The leaders of North and South Korea have signed a declaration agreeing to work for the “complete denuclearisation of the Korean Peninsula”.

At their first summit in more than a decade, the two sides announced they would seek an agreement to establish “permanent” and “solid” peace on the peninsula, ending a state of war that has prevailed for 68 years.

The declaration included promises to pursue military arms reduction, cease “hostile acts,” turn their fortified border into a “peace zone” and seek multilateral talks with other countries such as the United States.

“There will be no more war on the Korean Peninsula and we will be proclaiming the new era of peace is open,” South Korean President Moon Jae-in said.

“We will establish peace on the Korean Peninsula and the international order will be changed by this agreement.

“We will stop military hostilities and there will be some measures to stop these hostilities.”

North Korean leader Kim Jong-un said “we have been waiting for this moment”.

“When we met, it’s harder. We realised we cannot be separated, we are one nation, and that is how I felt,” he said.

“We are living next door to each other, there is no reason we should fight each other.”

Mr Kim and Mr Moon engaged in a historic first meeting earlier today – marking the first time one of the ruling Kim leaders has crossed over to the southern side of the demilitarised zone since 1953.

North and South Korea have agreed to open a permanent communication office in the North Korean town of Kaesong and resume temporary reunions between relatives separated by the 1950-53 Korean War.

Mr Kim and Mr Moon said after their summit that the Koreas will seek to expand civilian exchanges and pursue joint sports and cultural events.

Today’s meeting, aimed at ending their decades-long conflict and easing tensions over the North’s nuclear weapons program, came just weeks before Mr Kim was due to meet US President Donald Trump.

Mr Kim was accompanied by nine officials, including his sister Kim Yo-jong, who led the North’s delegations to the Winter Olympic Games in South Korea earlier this year.

During their private meeting, Mr Kim told Mr Moon he came to the summit to end the history of conflict and joked he was sorry for keeping Mr Moon up with his late-night missile tests, a South Korean official said.

Mr Kim told Mr Moon he would be willing to visit the presidential Blue House in Seoul, and wanted to meet “more often” in the future, the official said.

The White House also said it looked forward to continuing discussions with South Korea in preparation for the planned meeting of Mr Trump and Mr Kim.

KOREAN WAR TO END! The United States, and all of its GREAT people, should be very proud of what is now taking place in Korea!

Mr Kim and Mr Trump are expected to meet in late May or June, with Mr Trump saying on Thursday he was considering several possible dates and venues.

Just months ago, Mr Trump and Mr Kim were trading threats and insults as North Korea’s rapid advances in pursuit of nuclear-armed missiles capable of hitting the United States raised fears of a fresh conflict on the Korean Peninsula.