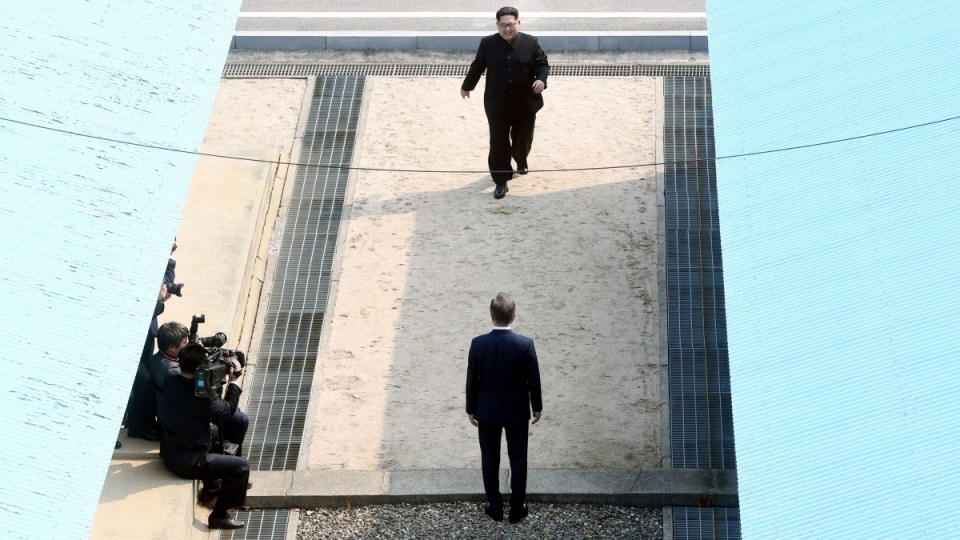 As planned, Mr Kim walked over to Mr Moon’s side of the demarcation zone on Friday morning to shake hands, marking the first time one of the ruling Kim leaders has crossed over to the southern side of the demilitarised zone since the Korean War ended in 1953.

A seemingly surprised Mr Moon hesitated before Mr Kim took his hand and lead him over the border line as onlookers laughed and applauded, before the men returned to the South Korean side.

See the historic moment below

South Korean honour guards then escorted the leaders to a welcome ceremony at a plaza in Panmunjom, the border village where Friday’s summit is being held.

On entering the Peace House, where the summit will take place, Mr Kim signed a South Korean guestbook, where he wrote: ” A new history begins now – at the starting point of history and the era of peace.”

The leaders, who seemed on the verge of war months ago, will discuss denuclearisation and securing permanent peace in the area, South’s presidential chief of staff, Im Jong-seok said on Thursday.

“I feel North Korea is sending their key military officials to the summit as they too, believe denuclearisation and peace are important,” Mr Im said.

The summit began in the Peace House on the southern side of the demilitarised zone at 10.30am (AEST) – an hour after Mr Kim and Mr Moon arrived.

Local media was able to film part of the opening discussions between the two countries, where Kim said he’s ready for “heartfelt, sincere and honest” talks on pending issues, and that the Koreas must not repeat the past where they were “unable to fulfil our agreements”.

He did not make any direction mention of North Korea’s nuclear weapons.

Mr Moon responded by saying there were high expectations surrounding the inter-Korean summit and that they produce an agreement that would please the people of Koreas and “every peace-loving person in the world”.

As Kim Jong-un drove away from the summit’s early session, his stretch limousine was immediately surrounded by 12 bodyguards who jogged alongside.

As Kim Jong Un drove away from the early session of his summit with South Korean President Moon Jae-in, 12 bodyguards were seen running beside the vehicle

The historic meeting came after North Korea’s announcement last week it had suspended nuclear and long-range missile tests, effective immediately, and scrapped its nuclear test site ahead of the planned summits with South Korea and later with the United States.

The White House released a statement saying the US was “hopeful that the talks will achieve progress”.

“The United States appreciates the close coordination with our ally, the Republic of Korea, and looks forward to continuing robust discussions in preparation for the planned meeting between President Donald J Trump and Kim Jong Un in the coming weeks,” the statement read.