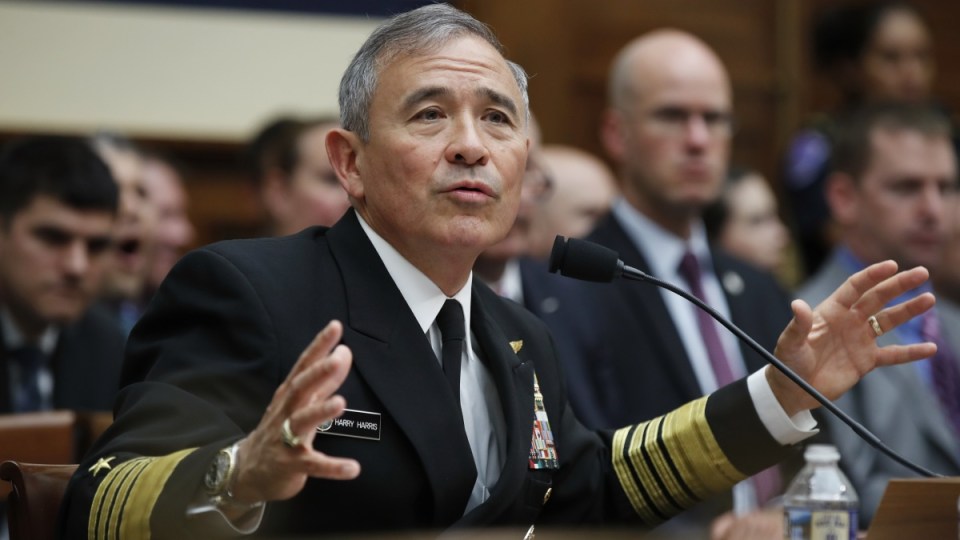 The US embassy in Canberra has been without an ambassador since 2016. Photo: AAP

The Trump Administration has overturned its nomination of Admiral Harry Harris as the next United States ambassador to Australia, instead announcing plans to send him South Korea.

Foreign Minister Julie Bishop confirmed the decision Wednesday morning, saying she was informed of the surprise move by acting US Secretary of State John Sullivan.

The ABC earlier speculated the decision to send Mr Harris to Seoul was part of an attempt by US President Donald Trump to beef up his team in the Korean Peninsula, ahead of his proposed historic meeting with North Korean leader Kim Jong-un later this year.

US media reported the decision was triggered by incoming Secretary of State Mike Pompeo. A vote on Mr Pompeo becoming America’s top diplomat could happen as early as this week.

Admiral Harris was due to appear at a confirmation hearing for the Canberra role this morning, but a spokesman for the US Senate Foreign Relations Committee said it had been postponed until May “at the request of the administration”.

“We understand this sort of thing happens and we also understand the challenges the United States has on the Korean peninsula,” Ms Bishop told reporters in Sydney on Wednesday.

She said Mr Sullivan made it clear a new appointment would be a priority for the next secretary of state.

“Based on the assumption he is confirmed by the Senate this week I hope to have a conversation with Mike Pompeo as soon as possible,” Ms Bishop said.

Australia has been without a US ambassador for more than 18 months, but Ms Bishop noted there had been other periods in the past when it took some time for a US ambassador to Australia to be appointed.

In the meantime, Charge d’Affaires Jim Caruso will continue to act in the role.

The decision to reassign Mr Harris gave rise to speculation that Australia has been snubbed in favour of another partner nation.

“I think it will be hard to escape a bit of a sense that Australia is being treated here as a second-class ally. I think that is regrettable,” Andrew Shearer, a former national security adviser to John Howard and Tony Abbott, told the ABC.

“Australia really is, if you like, a collateral casualty here to the shambolic personnel practices of the Trump administration,” he said.

Labor defence spokesman Richard Marles said ultimately it was a matter for the US but the sooner Australia got a new ambassador the better.

“America is well represented day in, day out.”

Mr Shearer, who now is senior adviser on Asia Pacific Security at the Centre for Strategic and International Studies in Washington, believed there would not be any ramifications from the decision.

“I don’t think there is anything sinister to it. I think it is much more typical of the ad hoc moment-to-moment decision making of this particular administration,” he said.

“I think the reality is the alliance is so deep and broad, much of our day-to-day business or intel cooperation or defence links or trade and investment goes on uninterrupted.”

Known for his hawkish views on China, Mr Harris has been commander of the Pacific Command based in Hawaii for the last three years.

He was set to retire later this year before accepting the mission to become US ambassador to Australia.

Mr Harris has extensive experience and interest in US-Australia relations.

The Trump Administration formally nominated Admiral Harris to become the Ambassador to Australia in February.