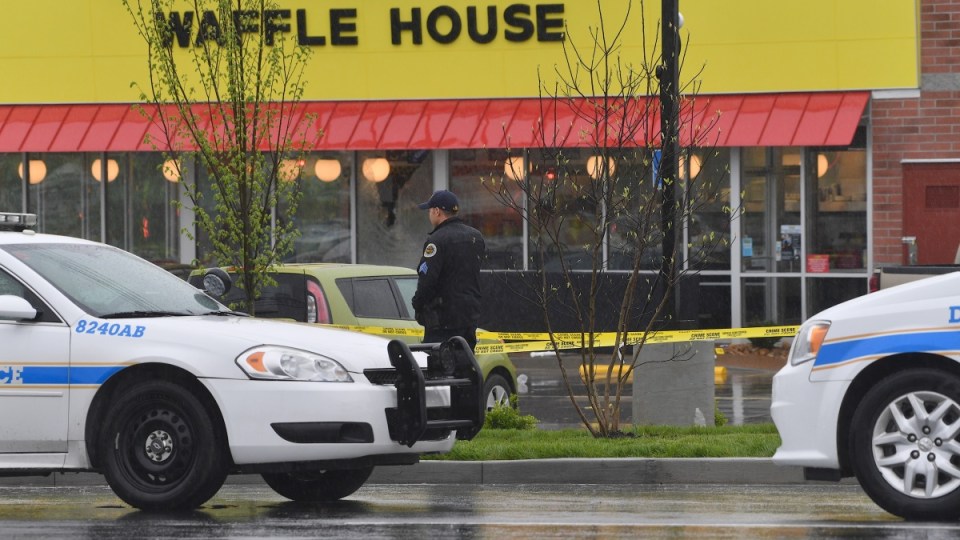 The gunman, fled the restaurant naked leaving dead and injured behind him. Photo: Getty

At least four people are dead after a gunman wearing nothing but a green jacket opened fire in a US restaurant before being disarmed by a patron.

The gunman, who is still at large, shot and killed two people in the car park of a Waffle House restaurant in Antioch near Nashville, Tennessee, shortly before 3.30am on Sunday local time.

The man, identified as 29-year-old Travis Reinking, then entered the restaurant and opened fire on patrons with what was described as an AR-15 assault-type rifle, killing one and wounding another who later died.

One diner who had hidden near the restrooms dashed out and pulled the rifle from the gunman when he paused to re-load and tossed it over the counter.

“The shots had stopped so he decided to rush the gunman, actually wrestled that assault rifle away, tossed it over the counter and, at that point, the gunman fled,” police spokesman Don Aaron said.

Witness Chuck Cordero told The Tennessean newspaper he was outside the restaurant when the chaos unfolded.

“He did not say anything,” Mr Cordero said of the gunman, who he described as “all business.”

Police told CNN the gunman shed his jacket before fleeing naked on foot. It was unclear if he had another weapon.

Reinking, originally from Illinois, was known to both Illinois and federal law enforcement, Mr Aaron said.

“Had that guy had a chance to reload his weapon, there was plenty more people in that restaurant,” he said.

Mr Shaw was grazed by a bullet, treated and released.

“When I was in the ambulance to hospital I kept thinking that I’m going to wake up and it’s not going to be real,” Mr Shaw was quoted as saying by theThe Tennessean.

“It is something out a movie. I’m OK though, but I hate that it happened,” he said.

Police said they believed Reinking had been living in a nearby apartment. A shirtless man wearing pants believed to be Reinking was spotted in nearby woods later on Sunday.

Local media reported that Reinking was arrested by the US Secret Service in July 2017 on charges that he was in an unauthorised area outside the White House.

Four of Reinking’s guns, including the AR-15 rifle he allegedly used Sunday, were seized following the arrest.

He was reportedly interviewed by local and federal authorities and his Illinois firearms authorisation was revoked.

Reinking’s four guns were given to his father, who has said he gave them back to his son, according to the authorities.

Police initially reported three dead and four injured at the Waffle House, but updated this to say a total of six people were shot. Three of those died at the scene, and one wounded person died at Vanderbilt University Medical Center.

Police cautioned that the man is to be considered still armed and extremely dangerous.