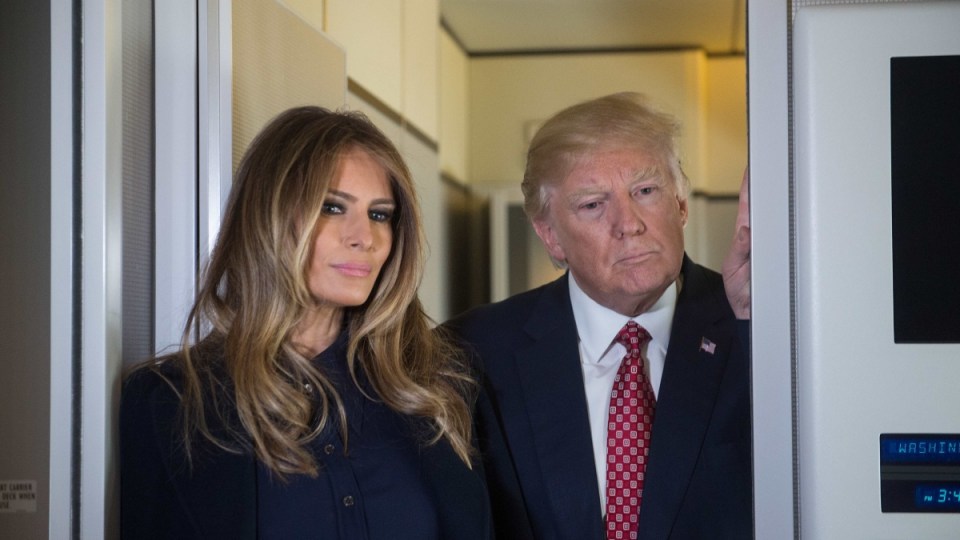 The President was gushing in his praise for his wife amid allegations of affairs. Photo: Getty

US President Donald Trump has described his wife Melania “my rock and foundation” as adult actress Stormy Daniels continues to speak out about her alleged affair with the property tycoon.

As Ms Daniels took to US television to release an artist’s impression of the man she said threatened her to stay quiet about the affair and offer a US$100,000 ($130,000) reward for his identity, Mr Trump was fulsome in his praise of the first lady.

The President said he “wouldn’t be the man I am today” without Mrs Trump in an email seen by Newsweek urging supporters to sign her birthday card with the subject line “My better half” from the Trump Make America Great Again Committee.

Mrs Trump declined to travel with her husband to his first State of the Union speech earlier this year and was hundreds of miles away at her husband’s Mar-a-Lago resort when an interview with Ms Daniels was first broadcast.

“Family is one of life’s most wonderful treasures, and serving as America’s First Family has been a truly great privilege!” Mr Trump said in an email seen by Newsweek.

“This month, our family is looking forward to a very special day. Please join us in celebrating the First Lady and my beautiful, kind-hearted and exceptional wife Melania’s birthday by signing her card,” the email was quoted as saying.

“Melania is my rock and foundation, and I wouldn’t be the man I am today without her by my side.

“She’s the cornerstone of our family, and an incredible mother to our son, Barron. I’m so proud of her accomplishments, and I hope you’ll wish her well on her special day.”

Since he was inaugurated as US President, Mr Trump has been plagued by historic claims of sexual harassment by several woman and the revelation that he had affairs with Ms Daniels and former Playboy model Karen McDougal.

Ms Daniels appeared on US panel show The View on Wednesday morning (AEST), releasing the picture of the man she claims threatened her and to offer a reward for anyone who can reveal his identity.

Ms Daniels alleges that she had a sexual encounter with Mr Trump in 2006 and that she signed a secret confidentiality agreement just days before the 2016 presidential election.

She is now suing Mr Trump over the legality of the agreement.

Ms Daniels told The View she was threatened by the unknown man in 2011, shortly after she had agreed in May of that year to sell her story about Mr Trump to a magazine.

In a previous interview with with 60 Minutes, she said she was in a Las Vegas parking when a man approached her and her infant daughter.

“A guy walked up on me and said to me, ‘leave Trump alone. Forget the story,'” Ms Daniels told 60 Minutes.

“And then he leaned around and looked at my daughter and said, ‘That’s a beautiful little girl. It’d be a shame if something happened to her mom.’ And then he was gone.”

On The View, Ms Daniels said one of the main reasons she did not report the encounter to police was that she had not disclosed her alleged affair with Mr Trump to her husband and was “embarrassed”.