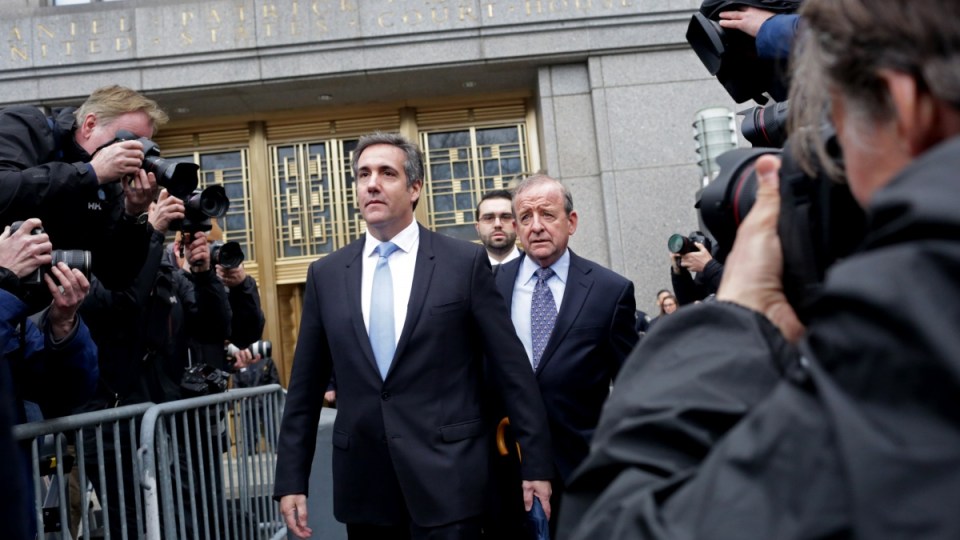 Michael Cohen asked a New York court to give his lawyers the seized materials taken by federal prosecutors. Photo: Getty

A fiery appearance by Donald Trump’s alleged former mistress, and an embarrassing revelation about a close journalist friend of the president have overshadowed day one of an important court case that threatens a US political showdown.

On Tuesday morning (Australian time), Mr Trump’s fiercely loyal longtime personal lawyer, Michael Cohen, fronted court to protest against the seizure of documents from his firm relating to the US President.

He was there to ask the judge to limit the ability of federal prosecutors to review documents seized as part of a criminal investigation.

But it was outside court the real drama began.

Adult film actress Stormy Daniels, who is not party to the proceedings, decided to show up and call a press conference over an unrelated dispute she has with Mr Cohen.

Ms Daniels is engaged in a separate civil legal fight over $US130,000 ($167,000) she received in a 2016 agreement arranged by Mr Cohen to stop her from discussing a sexual encounter she says she had with Mr Trump a decade earlier.

Photographers knocked over barricades outside the courthouse as they scrambled to get pictures of Ms Daniels, whose real name is Stephanie Clifford.

She staged a brief and fiery press conference outside the courtroom, accusing Mr Cohen of acting for years “like he is above the law” and of acting as “Mr Trump’s fixer”.

“He has played by a different set of rules or should we say no rules at all,” Ms Daniels told reporters.

“He has never thought that the little man, or especially women and even more, women like me, mattered. That ends now.

“My attorney and I are committed to making sure that everyone finds out the truth and the facts of what happened and I give my word that we will not rest until that happens.”

Inside, she quietly took a seat in the public gallery with her lawyer.

Stormy Daniels, speaking outside a court hearing in New York, said she and her attorney, Michael Avenatti, are committed to "making sure that everyone finds out the truth and the facts of what happened." https://t.co/GsOZH7i7fM pic.twitter.com/12v4pMIwfc

During the hearing, Mr Cohen suffered another distraction. He tried and failed to protect the name of another of his clients: Sean Hannity, the high-profile Fox News commentator and friend of Mr Trump.

Mr Cohen was ordered to reveal the name in order to prove he was a practicing attorney, as part of his bid to block access to documents seized from his law firm.

Mr Hannity is a conservative television host known for passionately advocating for Mr Trump on his Fox News show, and often receiving public praise from Mr Trump in return.

Before Mr Hannity’s name was revealed in court, Mr Cohen’s lawyer had argued the mysterious client was a “prominent person” who wanted to keep his identity a secret because he would be “embarrassed” to be identified as a client of Mr Cohen’s, The New York Times reported.

“I understand if he doesn’t want his name out there, but that’s not enough under the law,” Ms Wood said.

After his name was made public, Mr Hannity posted online denying Mr Cohen was his lawyer.

“Michael Cohen has never represented me in any matter. I never retained him, received an invoice, or paid legal fees. I have occasionally had brief discussions with him about legal questions about which I wanted his input and perspective,” he said.

Shortly after he tweeted: “I assumed those conversations were confidential, but to be absolutely clear they never involved any matter between me and a third-party.”

Michael Cohen has never represented me in any matter. I never retained him, received an invoice, or paid legal fees. I have occasionally had brief discussions with him about legal questions about which I wanted his input and perspective.

All this drama overshadowed the true purpose of the hearing. Mr Cohen, through his lawyers, was trying to argue that some of the documents and data seized in last week’s raids are protected by attorney-client privilege or otherwise unconnected to the investigation.

His lawyers asked the court to give them the first look at the seized materials so they can identify which documents may be privileged.

Failing that, Mr Cohen’s team asked the court to appoint an independent official known as a special master, a role typically filled by a lawyer, to go through the documents and electronic data seized under a warrant and decide what prosecutors can see.

A lawyer acting for Mr Trump personally, Joanna Hendon, also asked in a filing on Sunday to be allowed to review documents that in any way relate to the President, which she described as being seized amid a “highly politicised, even fevered, atmosphere.” She also appeared in court on Monday.