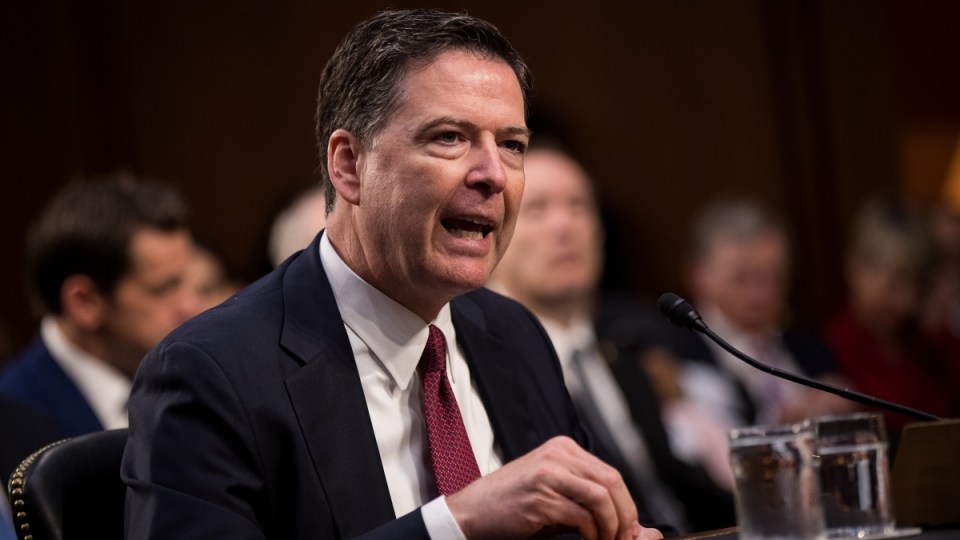 Donald Trump has launched a stinging rebuke against former FBI director James Comey, calling him a liar, leaker and “untruthful slime ball” ahead of the release of Mr Comey’s highly-anticipated tell-all memoir.

Salacious details from Mr Comey’s book A Higher Loyalty: Truth, Lies and Leadership were published by the New York Times ahead of its Tuesday release, with the book promising to eviscerate the US president’s character.

Mr Comey accuses Mr Trump of being “untethered to truth” and details an unproven evening the US leader spent with prostitutes in a Moscow hotel.

Sleep obviously did not come easily to Mr Trump who was up at 5am aggressively tweeting that it was a “great honour” to fire Mr Comey, 57, in May last year.

James Comey is a proven LEAKER & LIAR. Virtually everyone in Washington thought he should be fired for the terrible job he did-until he was, in fact, fired. He leaked CLASSIFIED information, for which he should be prosecuted. He lied to Congress under OATH. He is a weak and…..

….untruthful slime ball who was, as time has proven, a terrible Director of the FBI. His handling of the Crooked Hillary Clinton case, and the events surrounding it, will go down as one of the worst “botch jobs” of history. It was my great honor to fire James Comey!

The pair are engaged in an explosive showdown with Mr Comey’s first major interview with ABC News scheduled to be broadcast on Sunday evening in the United States.

Mr Comey – a former attorney for the district of New York – was leading an FBI investigation into whether members of Mr Trump’s campaign colluded with Russia to influence the 2016 election when he was fired by Mr Trump.

He has threatened to derail Mr Trump’s presidency since, revealing weeks after his dismissal how Mr Trump asked him to end an FBI investigation into former national security advisor Michael Flynn.

In the book’s first review, The New York Times describes A Higher Loyalty as the first big memoir by a key player in the norm-defying Trump presidency.

“This president is unethical, and untethered to truth and institutional values,” Mr Comey writes in the book.

But the veteran lawmaker will receive little support from Democrats who still resent Mr Comey for his role in the Hillary Clinton email scandal.

“I don’t think he had partisan motivations,” Jennifer Palmieri, a senior adviser to Mrs Clinton’s campaign told The New York Times. “But there’s a lot of people I know who don’t agree with me on that.”

“I don’t agree that he’s an untruthful slimeball.”

In the 304-page memoir, Mr Comey details the chaotic inner workings of the Trump administration and describes Mr Trump as someone unqualified for the presidency and with little grasp on the truth.

He also takes aim at Mr Trump’s cartoonish appearance, writing of their first encounter: “His face appeared slightly orange, with bright white half-moons under his eyes where I assumed he placed small tanning goggles”.

A Higher Loyalty: Truth, Lies and Leadership goes on sale in Australia on April 24.