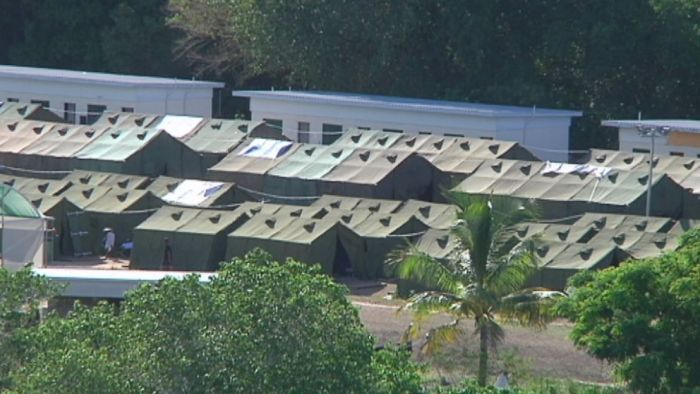 Asylum seekers on Nauru have had access to the Australian High Court. Photo: ABC

Matthew Batsiua also fears the move will plunge the legal system into chaos.

“There’s a worry they may replace the current system with a system that is weaker,” he told AAP.

The Nauru government argues that establishing its own appeals court will be less expensive for litigants, who will be able to observe appeal proceedings.

The Nauruan parliament is yet to pass a constitutional amendment to create an alternative court and the matter can’t be debated until later this month.

Mr Batsiua is one of three former opposition MPs and 16 other people charged over protests outside the Nauru parliament in 2015. A trial is set down for August.

Mr Batsiua accused the government arrogantly presuming it was a foregone conclusion parliament would rubber-stamp the new appeals court.

He wants the treaty termination overturned.

The government’s handling of the matter had left the legal system in “chaos”, he added.

“Ongoing cases are now put in jeopardy,” he said.

“We are sending asylum seekers to an island prison where they have virtually no rights if rights of appeal to the High Court are taken away,” he said.

(Foreign Minister) Julie Bishop needs to explain how the rights of asylum seekers and refugees for which Australia is responsible can be protected if the appeal link to the High Court is cut.”

He pointed out that the High Court had overturned eight of 11 adverse decisions made by Nauruan courts against asylum seekers.

President Baron Waqa has faced international criticism over the state of his country’s democracy and rule of law in recent years.

Mr Batsiua was one of five opposition MPs suspended from parliament in 2014, the same year the government deported the island’s only magistrate and cancelled the chief justice’s visa.

In 2015, the New Zealand government suspended the $1.2 million of aid it gives to Nauru’s justice sector due to concerns about the deterioration of civil rights and the rule of law.