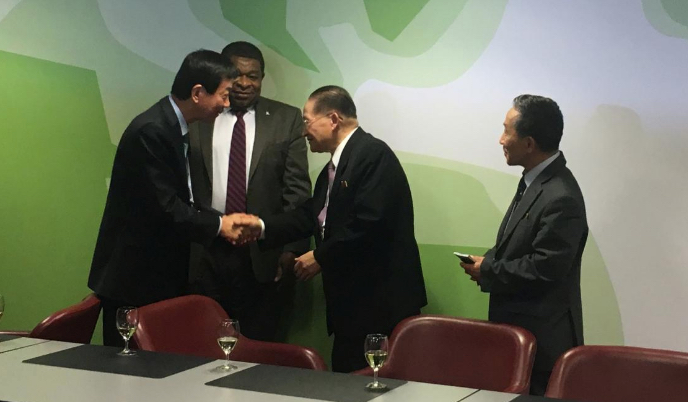 Officials from North and South Korea have shaken hands and drunk a toast to peace. Photo: Twitter

Senior politicians from North and South Korean have reportedly shaken hands and shared a toast to “peace” in a rare gesture of friendship suggesting relations between their two countries are thawing.

The pair were attending the annual assembly in Geneva of the Inter-Parliamentary Union, an organisation that brings together members of national parliaments from around the world.

“This is to peace, and the reunion of the Korean peninsula. Thank you very much for your commitment,” IPU secretary-general Martin Chungong of Cameroon, who organised the meeting, told the two delegations as they toasted.

The diplomatic thaw began in January with the announcement that Pyongyang would send athletes to compete in the Winter Olympics held in the South, as part in a unified Korean team.

It came after a year in which Pyongyang staged several missile launches and its biggest-ever nuclear test.

As Mr Chungong and the two Korean parliamentarians put down their glasses to link arms and shake hands again, the IPU chief said: “This is a symbol of their commitment to working together … If there are issues that are of concern to you that you want me to help with, the IPU to help with, you can count on the institution’s support.”

Mr Ri, speaking through an interpreter, told the private gathering earlier: “You know the secretary-general of the IPU makes a great contribution to the favourable situation now between the North and South.”

A source familiar with the matter said earlier on Tuesday that North Korean leader Kim Jong Un was part of a secretive delegation that arrived in Beijing by train on Monday and left on Tuesday, in what would his first known journey abroad since he assumed power in 2011.

Beijing is the main ally of secretive and isolated North Korea, as well as its biggest trading partner.

In a speech to the IPU assembly on Monday, Mr Ri said that North Korea’s policy of seeking better ties with the South was enjoying broad international support, and also called on the US to halt its sanctions and pressure.

Mr Chin, whose remarks were translated by the North Korean interpreter, told Mr Ri on Tuesday: “I think the next time on, there might be a higher step for us to have an easy contact.”