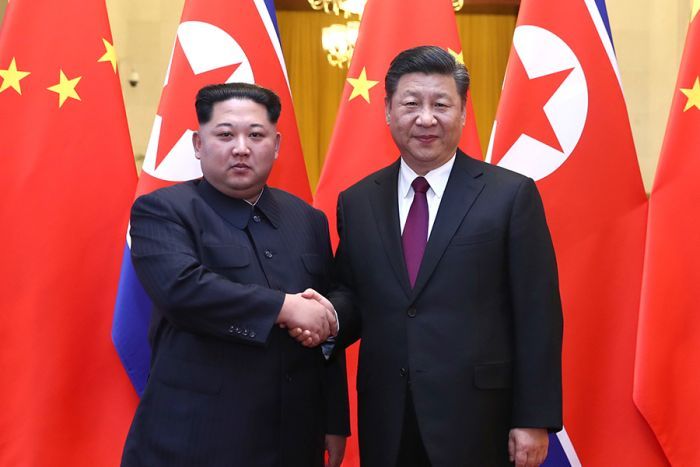 China has confirmed North Korean leader Kim Jong-un visited Beijing, and says it won a pledge from him to work towards denuclearisation.

Xi Jinpin and Mr Kim met during what the official Xinhua news agency called an unofficial visit from Sunday to Wednesday.

The trip was Mr Kim’s first known journey abroad since he assumed power in 2011 and analysts believe is preparation for upcoming summits with South Korea and the United States.

Beijing has traditionally been the closest ally of secretive North Korea, but ties have been frayed by the North’s pursuit of nuclear weapons and China’s backing of tough UN sanctions in response.

Mr Kim reportedly told Mr Xi that the situation on the Korean Peninsula was starting to improve because North Korea had taken the initiative to ease tensions and put forward proposals for peace talks.

“It is our consistent stand to be committed to denuclearisation on the peninsula, in accordance with the will of late president Kim Il-sung and late general secretary Kim Jong-il,” Kim Jong-un said, according to Xinhua.

For China, the visit is a reminder that Beijing remains one of North Korea’s most important allies and is a player not to be sidelined in denuclearisation talks.

“We see this development as further evidence that our campaign of maximum pressure is creating the appropriate atmosphere for dialogue with North Korea,” the White House said in a statement.

Mr Xi hailed Mr Kim’s visit as embodying the importance with which the North Korean leader regarded ties with China.

“We speak highly of this visit,” Mr Xi told Mr Kim, according to Xinhua.

Analysts say the North Korean leader would have felt a need to consult with his country’s traditional ally ahead of his planned meetings with South Korean President Moon Jae-in and US President Donald Trump in coming weeks.

Mr Kim reportedly said his country wanted to transform ties with South Korea into “a relationship of reconciliation and cooperation”. The two Koreas are still technically at war because their 1950-53 war ended in an armistice, not a peace treaty.

The North’s diplomatic outreach this year follows a tense 2017 when it conducted its most powerful nuclear test to date and tested three intercontinental ballistic missiles designed to target the US mainland.

Past visits by Kim Jong Il to China were surrounded in secrecy, with Beijing only confirming his presence after he had crossed the border by train back into North Korea.

Kim arrived in Beijing on the same heavily armoured train.

His late father Kim Jong-il designed the olive-green train so it could be used for lavish parties, bouts of heavy drinking and karaoke on his many journeys by rail.

The train also contained many cases of Bordeaux and Beaujolais from Paris, according to a Russian official who accompanied him on a three-week trip to Moscow in 2001.

Kim Jong-il is said to have had a fear of flying and was therefore known to use high-security private trains as his preferred mode of transportation.

The North Korean leader is able to give orders and receive news and briefings from inside the train due to the installation of advanced communications and flat screen TVs.

According to a 2009 South Korean report, Mr Kim has access to a total of 90 high-security carriages and three trains (an advance security train, a train to carry the leader and his entourage and a train that carries additional bodyguards and supplies).

Each of the carriages are bulletproof and as a result, the trains travel at a maximum speed of 61km/h making it a rather slow journey for the North Korean leader.