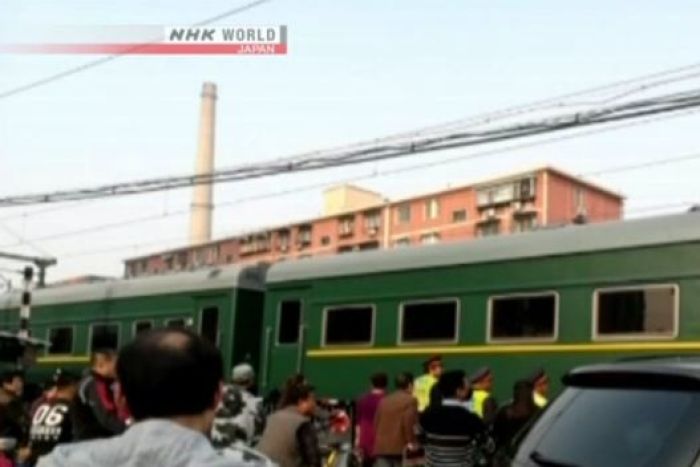 A train believed to be carrying a North Korea delegation arrives in China. Photo: NHK World

A Japanese news agency says a train believed to be used by high-level North Korean officials has left the Beijing station.

Kyodo News reported on Tuesday afternoon the train had departed.

A foreign guesthouse in Beijing had heavy security overnight and escorted vehicle convoys were seen near the guesthouse. A limousine was then seen entering the train station on Tuesday afternoon.

Kim has summits planned with South Korean President Moon Jae-in in late April and with US President Donald Trump by May.

While there has been no word of a similar meeting with Chinese leaders, China has been one of North Korea’s most important allies even though relations have recently chilled because of Kim’s development of nuclear weapons and long-range missiles.

A vehicle convoy entered the Diaoyutai State Guesthouse in Beijing on Monday evening and a military honour guard and heavy security were seen later. That followed reports from Japanese network NTV and public broadcaster NHK of a special North Korean train arriving in Beijing under unusually heavy security.

A spokeswoman for the Chinese Foreign Ministry said she was not aware of the situation and had no further comment. North Korea’s state-run media had no reports of a delegation travelling to China.

NTV reported the green and yellow train appeared very similar to the one that former North Korean leader Kim Jong-Il, Kim Jong Un’s late father, took to Beijing in 2011 and has 21 cars.

Whoever has arrived in Beijing got quite a motorcade: pic.twitter.com/qL1Q55Hnma