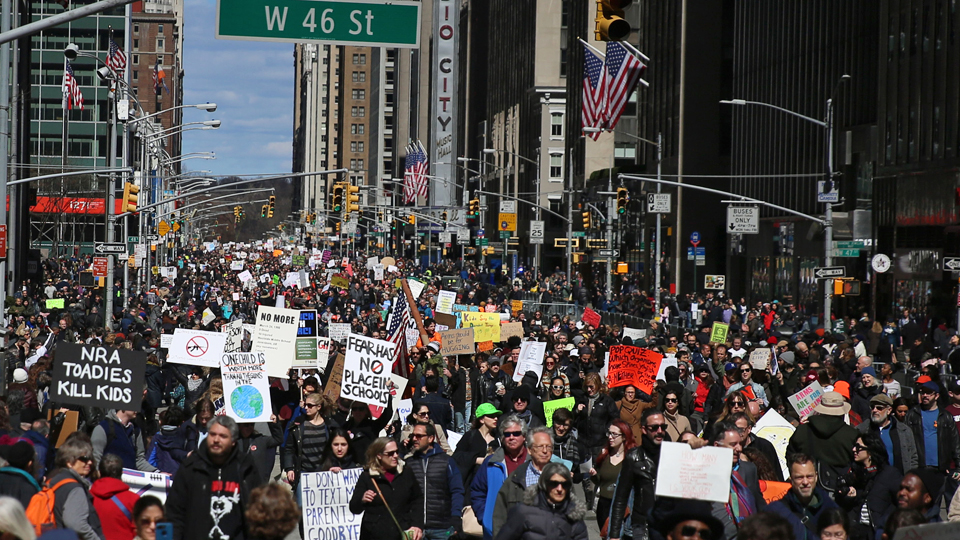 Protesters flooded the streets of New York City as part of 'March For Our Lives'. Photo: Getty

This sign was one of many that resonated among the tens of thousands who marched the 40 blocks from Central Park to 38th Street in New York City in the name of gun control.

On Sunday (Saturday US time), hundreds of thousands of people took part in rallies in cities across the world from London to New York as part of the student-led March for Our Lives movement.

Among the messages carried by school-aged protesters: “Don’t make me wear this bulletproof vest to school” and “The hardest part of school should be algebra”.

In a showing of support not seen in decades, dozens of Manhattan blocks were shut down as protesters of all ages marched through the city, with many of them angry at the influence of the National Rifle Association lobby group.

“The NRA has got to go,” chanted the crowd as they stormed past Trump Tower.

Australia’s gun ban, led by former prime minister John Howard after the 1996 Port Arthur massacre, has prevented 16 mass shootings, according to researchers at the University of Sydney.

This statistic was not lost on the crowd in New York, many referencing Australia’s low rate of gun deaths.

In incredible scenes, dozens of New Yorkers jeered and made offensive gestures toward the building owned by US President Donald Trump.

The students’ support came after a flood of gun-related massacres, including the two worst mass attacks in US history in a gay nightclub in Orlando and the Mandalay Bay in Las Vegas, during a country music festival.

On Saturday, people of all ages turned out to march, but it was the school-aged protesters who carried the voice of the movement.

Marjory Stoneman Douglas student Emma Gonzalez has become the face of the revolution, giving rousing speeches in the wake of the shooting and again on Saturday in Washington, DC.

The 18-year-old stood on stage for six-and-a-half minutes – four of those in silence with tears streaming down her face.

In New York, children, some of them still in prams, were an integral part of the march, holding signs with slogans such as “Guns suck”.

“This is not a moment. It’s the movement,” a sign said, representing the voice of the march.