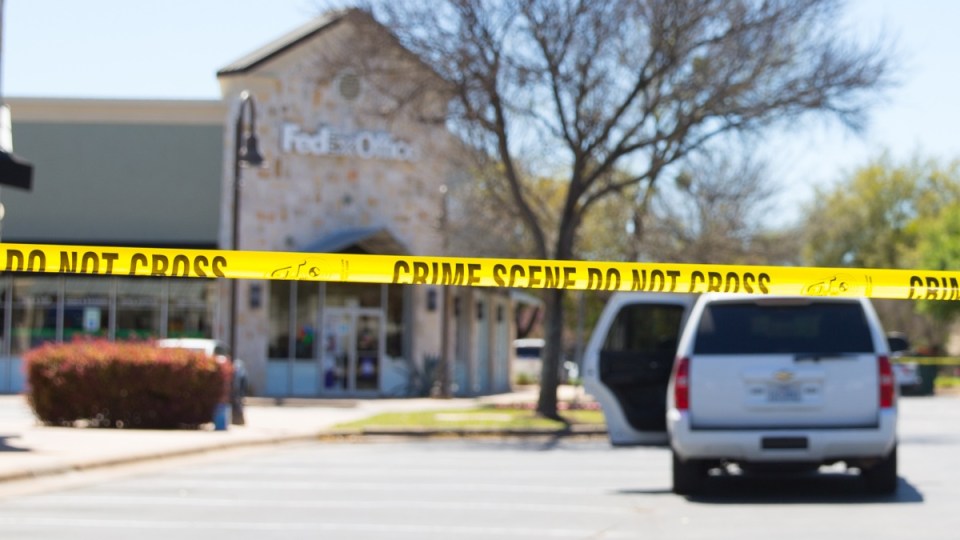 It's a "race against time" to find who has been sending parcel bombs in the Texas city of Austin. Photo: Getty

Emergency personnel are responding to another reported explosion in Austin, Texas, this one at a Goodwill store in the southern part of the city, authorities say.

Austin-Travis County Emergency Medical Services tweeted that at least one person was injured but that details about the severity of the injuries and the explosion itself were unknown.

It would mark the sixth explosion in the Austin area since March 2.

So far, two people have been killed and four others seriously injured.

The FBI is also investigating whether a package bomb that blew up at a FedEx Corp distribution centre near San Antonio is linked to a series of homemade explosives that hit the Texas capital of Austin this month.

The blast at the FedEx facility in Schertz on Tuesday was the fifth in the state in the past 18 days. If it is linked to the others, it would be the first outside the Austin area and the first that involves a commercial parcel service.

Police discovered another package at the same location that they believe is also loaded with an explosive device, San Antonio Police Chief Bill McManus told reporters.

“There was one other package that we believe was also loaded with an explosive device that they are looking at right now,” Mr McManus told reporters in Schertz, which is about 30km northeast of San Antonio.

The blast knocked a female employee off her feet and may have caused a concussion, Mr McManus said. Federal officials on the scene said she had ringing in her ears and was treated and released.

The package, filled with nails and metal shrapnel, exploded shortly after midnight local time at the facility, about 105km south of Austin, the San Antonio Fire Department said on Twitter.

The company described it as a FedEx Ground sorting facility. About 75 people were working at the facility at the time, fire officials said.

The individual or people behind the bombings are likely to be highly skilled and methodical, said Fred Burton, chief security officer for Stratfor, a private intelligence and security consulting firm based in Austin.

“This is a race against time to find him before he bombs again,” Mr Burton said.

The bombings in Austin did not appear to be linked to terrorism, White House spokesman Sarah Sanders said on Twitter on Tuesday.

Another explosion as police step up hunt for Texas bomber