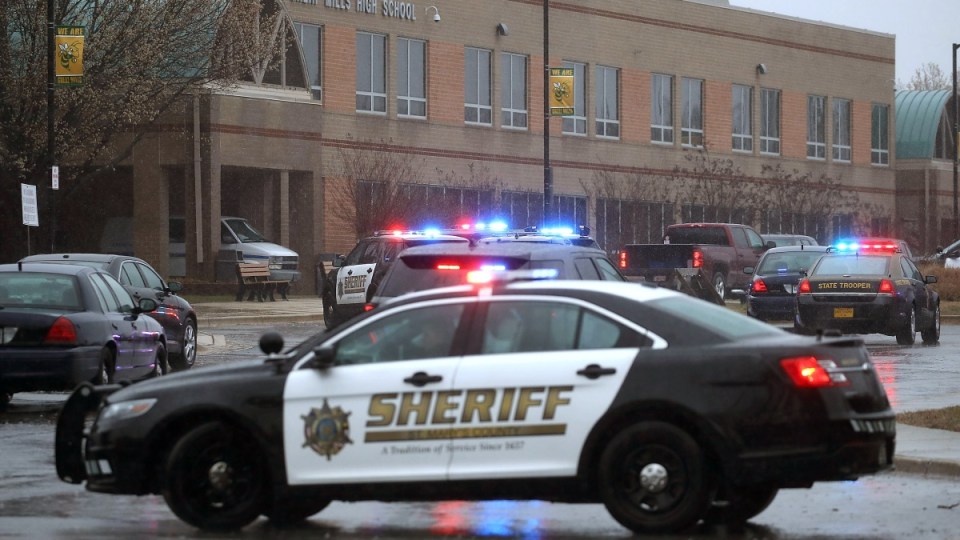 One person has died and another two were injured in a shooting at a Maryland high school. Photo: Getty

A gunman who critically wounded two fellow students at a Maryland high school has died after a shootout with a campus security officer.

The school day had barely begun on Tuesday morning local time when the shooter, who has not been identified, shot a male and a female student at Great Mills High School before the campus security officer intervened, county Sheriff Timothy Cameron told a media conference.

The wounded students are in a critical condition.

“Our school resource officer who was stationed inside the school was alerted to the event and the shots being fired,” Mr Cameron said.

A 14-year-old male student, who Mr Cameron earlier said was in critical condition, was in good condition after treatment at MedStar St Mary’s Hospital, according to hospital officials.

A 16-year-old female student, who also had been in critical condition, was stabilised and transferred to another hospital, they said.

The shooter used a handgun in the attack, Mr Cameron said. He was confirmed deceased at 10.41am local time after being taken to a hospital.

The latest in a long string of deadly shootings at US schools and universities took place a little more than a month after 17 students and educators were shot dead at Marjory Stoneman Douglas High School in Parkland, Florida.

“We are here for you, students of Great Mills, together we can stop this from ever happening again,” Emma Gonzalez, a senior at Stoneman Douglas High School who survived last month’s rampage, wrote on Twitter.

We are Here for you, students of Great Mills 💗 together we can stop this from ever happening again https://t.co/bkzL1FcVgu

Mr Cameron said investigators would determine whether the shooter died of a wound from the school resource officer’s gun or in some other way.

The public school’s roughly 1600 students were later escorted off campus by police, classroom by classroom, to reunite with their parents at another high school.

Police investigated rumours that someone was threatening to shoot people at the school last month, BayNet, a Maryland news outlet, reported on February 21.

The threats were unsubstantiated, but security was increased at the school, the principal said, according to BayNet.

It was unclear whether those rumours had any connection with Tuesday’s violence.

“I’m not aware of anything, but again we’re gonna go back and comb through that as well as anybody involved (and) their social media posts,” Mr Cameron said in response to questions about the report.

“You never think it’ll be your school and then it is,” Mollie Davis, who identified herself as a student at the school, wrote on Twitter.

“Great Mills is a wonderful school and somewhere I am proud to go. Why us?”

If the shooter turns out to be the only one dead that is a positive thing but PLEASE do not let this fade out of the news because it was not as fatal as it could have been. No one dying doesn’t un-traumatize anyone who was a witness to what happened today.