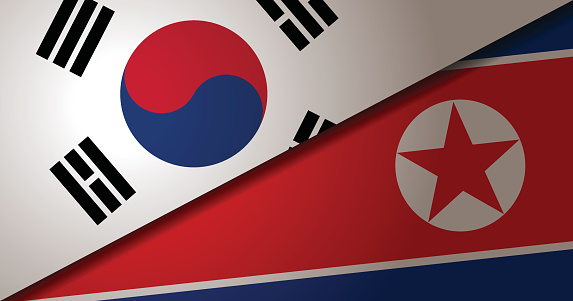 South Korea (left) and North Korea (right) have been divided for over 70 years. Photo: Getty

After North Korean leader Kim Jong-un stated that he wants to “write a new history of national reunification,” North Korea and South Korea could eventually unite as one country.

North Korea, also known as the Democratic People’s Republic of Korea (DPRK), and South Korea have been divided for over 70 years.

Why did North Korea and South Korea split?

They were unified for centuries under the Joseon Dynasty from 1392 to 1910.

However in 1910, Japan annexed the Korean peninsula and ruled the country for 35 years.

In 1945, World War II ended and Japan surrendered to the Allies.

In 1948, two separate governments were established in Pyongyang and Seoul.

In 1950, Syngman Rhee threatened to attack North Korea so Kim II-Sung attempted to unify the peninsula by invading South Korea.

The North Korean People’s Army poured 75,000 soldiers across the 38th parallel, the border between north and south, triggering the Korean War.

The US participated in the war due to the idea of containment.

“The American aims was to work with its allies to contain the spread of soviet and communist Chinese power using political, economic and if necessary military pressures,” the SCMP reported.

The US reportedly believed the loss of South Korea could create a domino effect of losing the power to the rest of Asia.

The conflict lasted three years and eventually became a proxy war between the US and cold war powers China and Russia.

However, 7747 American soldiers and 26,000 Chinese soldiers are still missing.

Is there a cultural divide between North Korea and South Korea?

They share some similarities and differences in their identity, culture and language.

South Korea bases its language off the Seoul dialect. It tends to borrow words from the English language.

In contrast, leaders in North Korea have urged citizens to primarily use the Pyongyang dialect and to keep borrowed words out of the Korean language.

The spilt of the countries has shaped the differences in Korean’s outlook in life.

South Korea has a vibrant democracy due to the mass movements of students, middle-class citizens and intellectuals.

North Korea’s beliefs run on propaganda and ideology of Juche or in other words ‘self-reliance’. The country is run by a dictatorship of a one-man rule.

Surveillance, punishment and repression are heavily present in the their society. They rely on terror and threats in the means to sustain power amongst the citizens.

North Korea and South Korea: When and why they split