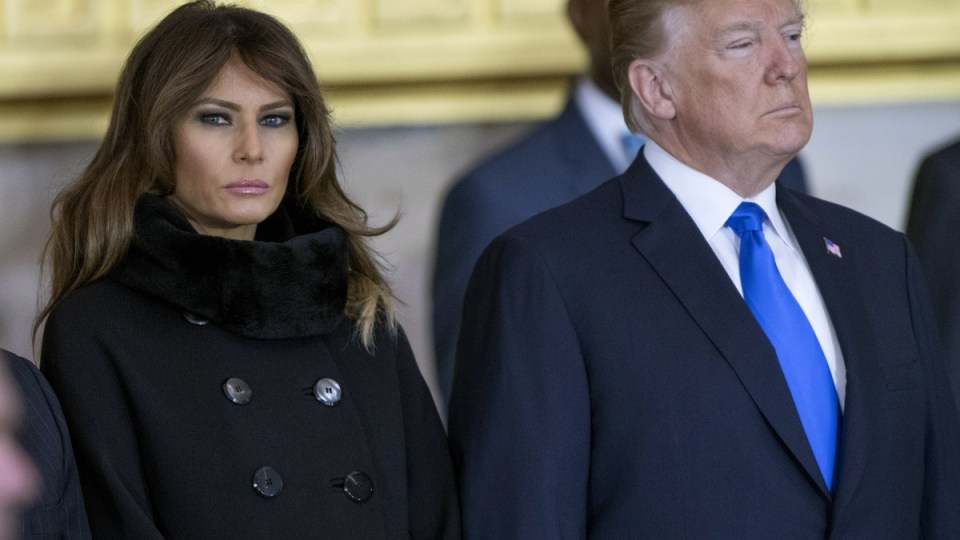 "They clearly have some sort of understanding, some emotional elasticity – or financial dependency." Photo: Getty
opinion

Dear America: Come on, you can’t be serious.

It’s not even the infidelity that most bothers me. I view that as an issue between spouses and with the other person involved. I contend that we on the outside never really know what understandings may exist in a marriage, unless the two parties within reveal it.

In this case, Melania knew exactly the kind of man she was getting.

When Donald first meets Melania, they are at a New York Fashion Week party to which Donald has been invited by the wealthy Italian businessman who brought Melania to America on a modeling contract and work visa.

According to GQ, sometimes, to promote his models, the businessman “would send a few girls to an event and invite photographers, producers, and rich playboys”.

Trump is on a date with another woman that night. He is also in the process of divorcing Marla Maples, his second wife, with whom he had had an affair while still married to his first wife, Ivana Trump.

According to GQ: “He sent his companion to the bathroom so he could have a few minutes to chat up the model he’d noticed. But Melania knew of Trump’s reputation – which was immediately confirmed by the fact that he had come to the party with a date and was now asking for her number.”

In April 2004, Donald proposes to Melania at the Met Gala.

By the way, just to underscore how vile this man is, in September 2004, Trump goes on Howard Stern, and while discussing with Stern how beautiful they both find Trump’s daughter Ivanka, Stern says: “Can I say this? A piece of ass.” Trump responds: “Yes.”

Trump marries Melania in January of 2005. They had signed a prenuptial agreement. Nine months later, in September, Access Hollywood records Trump boasting about sexually assaulting women – kissing and groping them without prior consent – and claiming: “When you’re a star they let you do it. You can do anything.”

Six months after the tape is recorded, on March 20, 2006, Mr and Mrs Trump’s son Barron is born. (That means that Melania was pregnant when Trump was making his lewd remarks about assaulting other women.)

At the very same time that the #MeToo and #TimesUp movements have given voice to women, and led to men being held accountable, particularly in the private sector, Trump has almost single-handedly aided in the numbing of America’s sympathies for women who speak up about the sexual exploits, misdeeds and assaults of elected officials.

Clifford alleges that the “intimate relationship” began in July 2006 and continued “well into the year 2007”.

Trump also goes on The View in 2006 and says of Ivanka: “She does have a very nice figure. I’ve said if Ivanka weren’t my daughter, perhaps I’d be dating her.”

His daughter! And remember, he is newly married to Melania, who will give birth to Barron just 14 days after his appearance on the show.

And through it all, Melania has remained. So, that’s their marriage. They clearly have some sort of understanding, some emotional elasticity – or financial dependency – that is beyond my comprehension.

So that part is what it is.

As for the present news, it is not clear to me if the money paid by Donald Trump’s personal attorney to Clifford, to prevent the disclosure of a sexual affair Clifford says she had with Trump, will be found in violation of federal campaign finance laws. Neither is it clear to me if the courts will allow Clifford to get out of her nondisclosure agreement.

Those are all legal issues. What matters most to me about this sordid tale is the way it fits into a pattern of behaviour and a Trump worldview about women: that they are mere objects and opportunities, a reward owed to men of wealth, and that objections and protestations are invalid.

This is about the defamation of, silencing of, and shouting down of women.

Yes, there have been some political resignations, but primarily among people who have confessed to their sins. But among the men like Trump who deny the accusations, little has been done. Indeed, Trump has made a habit of defending such men, using the forcefulness of their denials as proof of innocence. Trump himself has been accused of sexual misconduct by 19 women.

America, this is not about partisanship; this is about principle. Each of us must proclaim that this situation is over the line, that women matter, that their voices and their stories matter, that propriety, honour and character matter.

‘Melania knew exactly the kind of man she was getting’