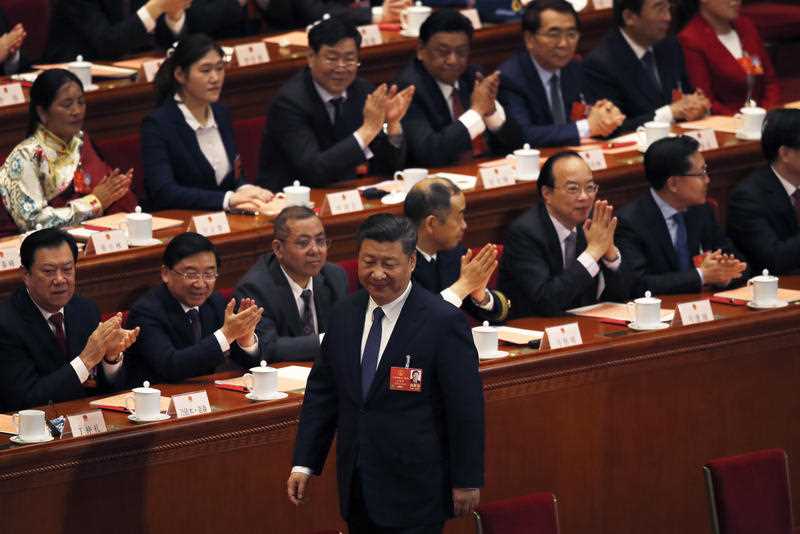 Delegates applaud as Xi Jinping walks to his seat after casting his vote to abolish term limits on the presidency. Photo: AP

Sunday’s announcement of the vote, witnessed by reporters in the Great Hall of the People, passed with two “no” votes and three abstentions among almost 3000 delegates.

China’s ruling Communist Party proposed the amendment last month and there was never any doubt it would pass as Parliament is packed with loyal party members who would not have opposed the proposal.

In a sign of the issue’s sensitivity, government censors are aggressively scrubbing social media of expressions ranging from “I disagree” to “Xi Zedong”.

The amendment upends a system enacted by former Chinese leader Deng Xiaoping in 1982 to prevent a return to the bloody excesses of a lifelong dictatorship typified by Mao Zedong’s chaotic 1966-1976 Cultural Revolution.

The slide toward one-man rule under Mr Xi has fuelled concern that Beijing is eroding efforts to guard against the excesses of autocratic leadership and make economic regulation more stable and predictable.

The government has said lifting the term limits is about protecting the authority of the party with Mr Xi at its centre.

The party gave Mr Xi the title of “core” leader in 2016, a significant strengthening of his position at the time.

While the presidency is important, Mr Xi’s positions as head of the party and head of the military are considered more important, and these titles are always given first by state media. With the passage of the amendment, now none of the posts have formal term limits.

The amendments also include inserting Mr Xi’s political theory into the constitution, something that was already done for the party constitution in October, and clauses to give a legal framework to a new super anti-corruption department.

US President Donald Trump was criticised last week for seeming to approve of Mr Xi’s unlimited rule, saying: “President for life … I think it’s great. Maybe we’ll have to give that a shot some day.”