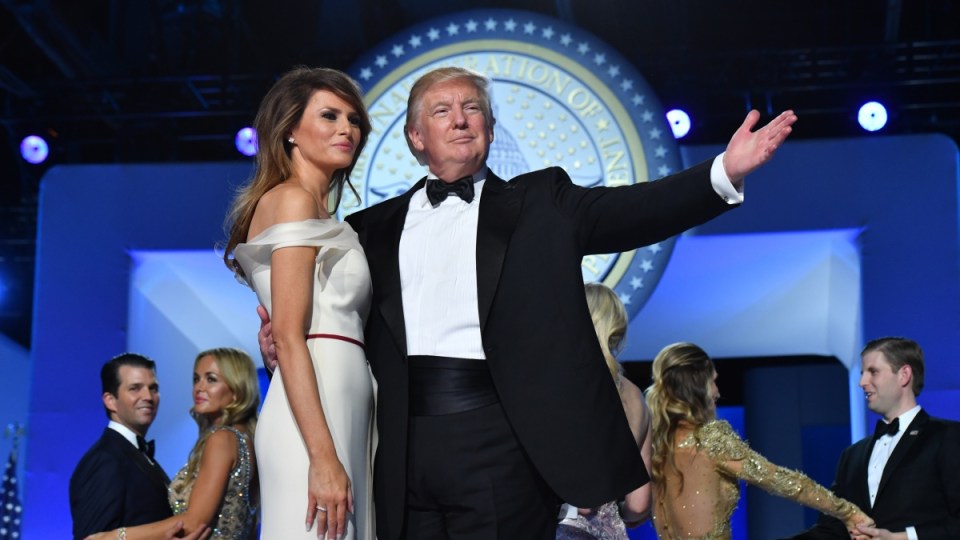 Donald Trump gamely poked fun at himself in a rare appearance at a press dinner. Photo: Getty

US President Donald Trump has ended a chaotic week by uncharacteristically poking fun at himself in front of the nation’s press by saying his wife Melania may be the ‘next to leave’ the White House.

“So many people have been leaving the White House,” CNN quoted Mr Trump as telling an audience of Washington’s top journalists at the annual Gridiron Club dinner.

“It’s actually been really exciting and invigorating ’cause you want new thought. So I like turnover. I like chaos. It really is good,” he was quoted as saying.

“Now the question everyone keeps asking is, ‘Who is going to be the next to leave? (adviser) Steve Miller or Melania?’ ”

The President appeared to backtrack on this remark by sincerely adding that his wife is “actually having a great time” in Washington.

Sunday’s Gridiron Club dinner was a closed function and information from the night is reliant on pool reports from attendees.

Mr Trump has experienced a tumultuous week, punctuated by the sudden resignation of trusted communications director Hope Hicks and the apparent sidelining of senior aide and son-in-law Jared Kushner.

In the first year of the Trump administration, 34 per cent of the President’s staff were either fired, reassigned or resigned.

Mr Trump made light of the fact that Mr Kushner’s White House security was downgraded.

Apologising that the dinner was behind schedule, the President said he was late “because Jared couldn’t get through security”.

“Ivanka, you’ve got to do something!” Mr Trump said, in reference to his daughter Ivanka Trump, Mr Kushner’s wife.

He then went on to call Mr Kushner a “great guy” who has “suffered.”

The Gridiron dinner was the President’s first appearance at a press function after last year turning down an invitation to the White House Correspondents’ Dinner.

Both functions, which are traditionally attended by the US president, are known for their light hearted ribbing of the head-of-state.

He said Mike Pence was eager to take his job and was “one of the best straight men”, adding the Vice President “starts out each morning asking everybody, ‘Has he been impeached yet?’”.

The President was also parodied in skits by Gridiron members, including Fox News host Bret Baier making cracks about the Russia probe, singing to the tune of You Can’t Hurry Love with lyrics that included, “But how many Russians did the campaign meet?/ Don Jr. in Trump Tower, about ‘adoption’ — sure.”