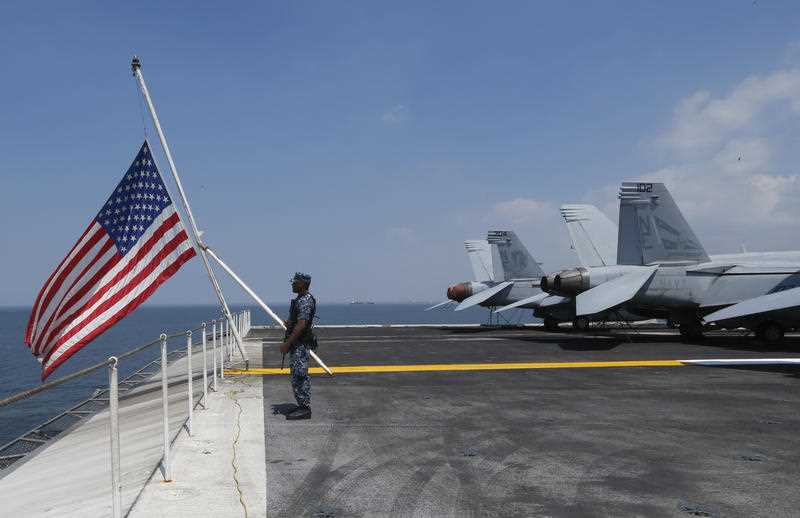 The US is ready to defy China. But is Australia? Photo: AP

The United States of America has placed Australia in an unenviable position by asking it to join in the effort to assert maritime freedom in the South China Sea.

The Australian government has previously voiced its concerns over China’s military build-up in the region, but backing America’s freedom-of-navigation exercises in the South China Sea goes far beyond the megaphone diplomacy currently employed.

And it could have huge repercussions for Australia.

That is one reason why, when Prime Minister Malcolm Turnbull used Question Time on Monday to describe last week’s visit to Washington as a success, he made no mention of one very public request he had received from President Donald Trump.

In praising the relationship between Australia and the US, Mr Trump used a weekend media conference to hand a tough test to his Australian counterpart.

The US would “love to have Australia involved” in freedom-of-navigation exercises in the South China Sea, Mr Trump said.

“And I think Australia wants us to stay involved.”

It is a show of solidarity between allies in the face of an increasingly brazen China seeking to expand its own sovereignty.

The US is pressuring other states to back this show of defiance.

But for Australia, much more is at stake, as participation in these exercises will undoubtedly be regarded by China as acts of aggression.

China has already expressed its fury at American efforts to date to assert shipping rights close to the new islands it has built.

“The relationship we have with Australia is a terrific relationship and probably stronger now than ever before,” Mr Trump said.

The US wants and needs to send a message to China and is seeking as much support as it can muster. But Australia is possibly in the most awkward position of any other country to take on such a task.

China is Australia’s largest trading partner and an imposing military presence in the region. Neither of those factors bode well for an Australia that is seen to be too eager to stand up to it.

The Prime Minister did not respond to the President’s invitation to join in on the exercises and he has given little away on the subject since.

“It is much more of a concern for us to antagonise China than it is for the US,” Professor Williams said.

“We have more at stake in our trade relationship than the US and strategically we have a great deal at stake.

“I’m a bit concerned that the US is dragging us into something that might not be promoting our interests. It is promoting the US’ interests.

“This might also have a lot to do with America wanting to annoy North Korea. Australia needs to have a more measured approach and not be rushing to follow the US right now.”

Professor Williams said the Prime Minister’s reluctance to offer up immediate fulsome support could also have to do with the physical limitations attached to the request.

“The Prime Minister probably wanted to consult with Defence too before he makes any kind of undertaking,” he said.

“There are the practicalities of it all. Can we physically do it right now? Do we have resources available at this moment? There are these types of questions that need to be answered before even contemplating a commitment to join in these exercises. Australia isn’t like the US with huge military resources.

China has built and militarised islands in the South China Sea and is in dispute over areas claimed by Taiwan, Malaysia, Brunei, Indonesia, The Philippines, and Vietnam.

Japan and the Korean Peninsula also have a huge interest in the dispute, which also includes the Spratly Islands, Parcel Islands and the Gulf of Tonkin.

An estimated $US5 trillion of global trade passes through the South China Sea, meaning most of the globe has an interest in this important shipping lanes area remaining international waters.

Australia caught in the middle of South China Sea conflict